Mambo with the Honeymooners! 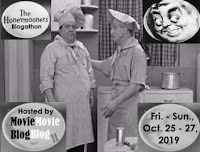 The Honeymooners Blogathon is an event dedicated to the CBS television show starring Jackie Gleason, hosted by Movie Movie Blog Blog II. For a list of participating bloggers, visit the link at the host site.

Earlier this year, I discovered for the first time that The Honeymooners only had one season. All those great episodes, those hilarious moments embedded into our collective unconscious from years of late-night viewings and holiday marathons, constituted a single season on TV?

Hard to believe, but it’s true: all 39 episodes—not counting the sketches from Jackie Gleason’s previous series, Cavalcade of Stars and The Jackie Gleason Show, nor the periodic revivals that came afterward—aired during the 1955-56 season and that was it... but what a run!

Picking one episode to talk about is like picking which Beatles song you like best, but I settled on one that not only features all four stars, but defines their roles well and even has one or two things to say about men and women. 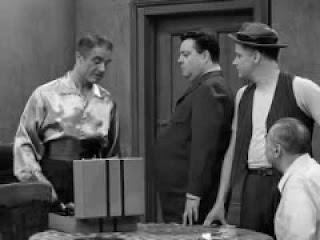 Episode 23, “Mama Loves Mambo,” aired March 3, 1956, written by Marvin Marx and Walter Stone and directed by Frank Satenstein. The plot is simple, like most of the episodes: a new neighbor, a Latin dance teacher named Carlos, impresses Alice, Trixie and the other wives in the building with his charm and courtesy but threatens the egos of Ralph, Norton and the husbands. Ralph and Norton try to be more like him to save their marriages, but that creates other problems.

During the mid-20th century, mambo dancing was pretty big in America. The music originated in Cuba, a combination of native music and American swing, and many believe it began with bandleader Perez Prado. Here’s a sampling of his music. The dance came to the States in the mid-40s via the Park Plaza Grand Ballroom—the venue immortalized in The Great Gatsby, plus lots of movies—and expanded from there. They say it’s difficult to learn, but this video teaches the basics.

The dance isn’t done as much these days, though dancers like Eddie Torres keep it alive. Here he is in action from 2016. And of course, you’ve seen plenty of mambo-ing in the movies, like that hot dance sequence in the original West Side Story, to pick one example.

The title “Mama Loves Mambo” is a play on the popular song “Papa Loves Mambo.” Perhaps the best known version is by Perry Como—which is ironic, because his TV show was a competitor of HM in the ratings. The song they dance to in the episode is “Claves for Mambo” by Tito Rodriguez, a terrific little number.


“Mama” uses the character Carlos to contrast the old ways with the new. Ralph and Norton, after years of marriage to Alice and Trixie, think it’s enough just to provide for them, but of course, the wives want more. Carlos subverts the Latin-lover stereotype by conspicuously lamenting his bachelor status. Is he closeted? Possibly; we never see him put the moves on Alice or Trixie or any other woman, but it’s easy for Ralph and Norton to think the worst. Mambo dancing represents the newer, changing times, and they feel they gotta change with them—but when they overdo it, the girls decide, in the end, they’re really old-fashioned after all, and the status quo is preserved for another week.

Carlos was played by a Hungarian-born actor named Charles Korvin. He came to the States during the war and played on Broadway before coming west. He made three movies with Merle Oberon as a romantic lead. In 1951, he was a victim of the Hollywood blacklist–he wouldn’t snitch—and turned to television, where he got a recurring role on Disney’s Zorro series. He also returned to Broadway and starred as the king in The King and I for awhile. Among his pals included Greta Garbo, Deborah Kerr and Julia Child, who was impressed by his cooking. He was married three times and had two kids. 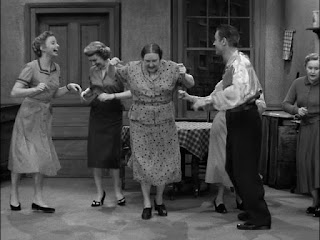 The role of Carlos was inspired by Cesar Romero, who danced in a number of his best films (here’s one example), and he was considered for the part. Korvin had to be taught mambo, but it wasn’t like he did any super fancy moves.

“Mama” also features the Manicottis, recurring characters who either pop up or are referred to once in awhile, played by Louis Sorin and Zamah Cunningham. She was a Gleason regular from his previous shows; his career goes back to the tail end of the silents (he was in the Marx Brothers’ Animal Crackers). They play Italian immigrants, neighbors of the Kramdens, and they make the most of their limited screen time. Cunningham, a zaftig middle-aged woman, shows off some mambo moves of her own, and she almost steals the scene from Gleason!

If you’ve never seen The Honeymooners (why?), this episode is a terrific place to start.
Posted by Rich at 7:00 AM