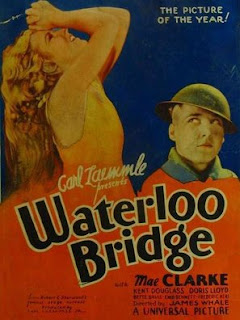 In this month’s link post, I included the piece by Karen from Shadows and Satin and the noir zine The Dark Pages about Mae Clarke. It made me want to check out some of the actress’s other stuff.

Chances are if you’ve heard of Clarke, you only know her for being the one who got a grapefruit squished in her face by Jimmy Cagney in The Public Enemy. She made other movies, including one from the same year, 1931, called Waterloo Bridge. If you’ve heard of that movie, though, you probably only know it from the Vivian Leigh version, made nine years later, so, yeah, one could argue Clarke’s career has been overlooked—hence Karen’s deep dive into her filmography.

Bridge was directed by James Whale, of Bride of Frankenstein and Invisible Man fame, but it’s no horror flick. It’s a very down-to-earth wartime romance, set during the First World War. Clarke is an American showgirl in London who meets soldier Kent Douglass (AKA Douglas Montgomery) during an air raid at the titular bridge. They spend some time together and he’s instantly smitten, but he doesn’t know Clarke turns tricks on the side to keep a roof over her head—and she’s terrified of him finding out. Look for a pre-fame Bette Davis in a few scenes! 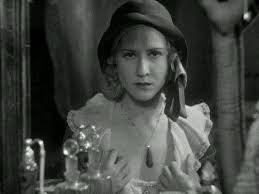 Bridge is a pre-code film, made before the self-imposed restrictions on cinematic content were enforced by a Hollywood fearful of government intervention, and as such, it wasn’t explicit about sex and violence, but it made the audiences of its day read between the lines much more than modern films need to do. No one ever out-and-out proclaims Myra, Clarke’s character, is a ho, but the way the film is written and acted, you can come to that conclusion on your own.

In one early scene, Clarke and a friend are “on duty,” standing in front of a shop window, when a cop comes along. He gives them the eye and at first you wonder, what are they doing wrong? But the way they look at each other, the cop’s body language, and one’s knowledge of such situations—historically speaking, why would a cop be suspicious of women loitering on the street at night?—and the answer is obvious without it being stated outright.

This sort of thing was what filmmakers in the pre-code era did, and it was a kind of storytelling that engaged the audience and forced them to not only pay close attention to what was going on, but to rely on their personal experience. 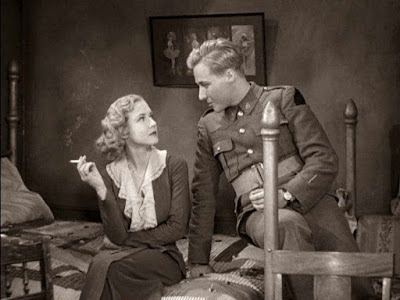 Douglass’ character struck me as naive. He justifies his infatuation with Clarke by saying how wartime life makes people act on their impulses sooner, since they could all be dead tomorrow. I can buy that rationale, but I still couldn’t completely buy him wanting Clarke so swiftly because he was only nineteen. I remember how I was at nineteen, and though I thought I wanted to marry the girl I loved at the time, I was not ready at all.

But let’s get back to Clarke. Karen called her performance in Bridge “a revelation—she displayed a natural acting style that was liberally infused with poignancy, sincerity, and subtlety.” For the most part, I agree; she rarely descends into melodramatic histrionics, and she shines in a number of important scenes, such as the one with Douglass’ mom where she confesses her illicit sideline.

Myra is a very proud character; she won’t take charity and a part of her thinks she can do alright on her own, but deep down, she still wants love, and she fears her circumstances will keep her from it. It’s too bad Clarke didn’t become as big as Leigh or Harlow or Crawford, but I guess there was only so much room at the top in those days.