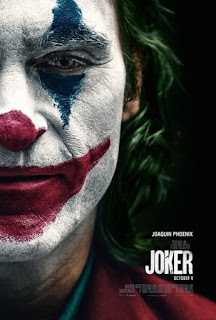 This is the movie everyone was so scared would incite another mass shooting?

I almost fell asleep while watching it!

In fairness, I saw Joker the day after a late night out with Virginia. I got home at three in the morning, so while I was wide awake by the time the movie began, I didn’t have much sleep. Still, by the time I started dozing off, maybe a smidge past the halfway point, I had already decided Joker was not saying anything new or different; that Joaquin Phoenix, while excellent in what will almost certainly be an Oscar-nominated performance, couldn’t make up for a largely derivative screenplay (though he does come close); and that Joker isn’t a love letter to Martin Scorsese. It’s a rehash of Alan Moore. 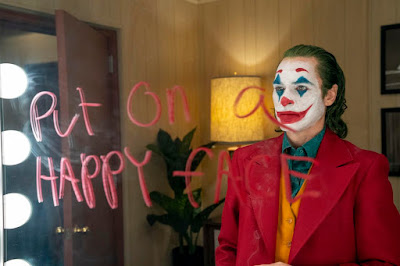 First, a brief word on the “controversy:” by the time you read this, there will have been no violent massacre inspired by this movie, similar to the one in 2012 or otherwise—though certain factions within the media seemed eager for one. Once again, we’ve seen that movies, in and of themselves, don’t create psychopaths or terrorists or white supremacists or what have you, though they sure do make great scapegoats.

Because we need scapegoats. We need someone or something to blame for the faulty wiring in our heads—otherwise, we might have to accept responsibility for our own fuck-ups, and we can’t have that. We can’t admit that electing a misogynistic, egotistical, bullying charlatan for president three years ago might have been a mistake. Let’s blame immigrants instead. Let’s blame North Korea, Russia, Canada.

Why should the movies be any different? 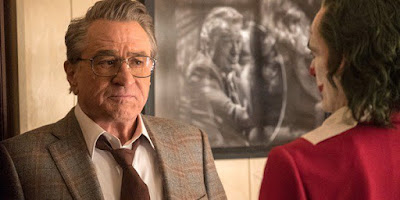 Getting back to Joker, though... maybe this is only apparent if you’re a comic book nerd, but now that comics are more common than before, perhaps not: as I watched this, I thought a lot about the work of the comics writer Moore. Take one part The Killing Joke (Batman novella which tells an origin story for the Joker, dealing heavily with themes of depression and insanity), one part Watchmen (“realistic” superhero story set in the 80s featuring a mentally-disturbed character shat on by the world), and a touch of V for Vendetta (anarchy as a solution to society’s ills), and you get this movie—only director-co-writer Todd Phillips read the Cliff Notes versions.

I didn’t connect with Phoenix’ character and I didn’t buy him as the supposed symbol for class-war oppression within this version of Gotham City. I would’ve needed a wider scope for that. Phillips hints at the larger world around Phoenix, partly through the presence of the Thomas Wayne character (Batman’s dad, in case you didn’t know), but I never got the feeling that class warfare was brewing throughout the city because so much of the narrative was focused on Phoenix. That might have made for a more engaging story—Gothamites seeing in him what they choose to see after news of his first murders spreads, while he’s oblivious to it all. That almost sounds like the kind of story Moore would write. 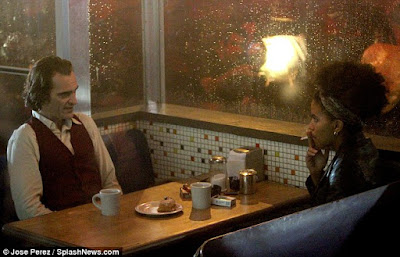 But it’s not what we got from this movie, which didn’t need the connection to Batman, really, but of course, no one would care about it if it wasn’t there. The movie treads around the fringes of the Batman mythos until the climax, when it gives us the fanservice moment we all anticipated, which has less to do with the Joker and everything to do with Batman (if you’ve seen the movie, I think you know what I’m talking about).

Joker wasn’t terrible—Phoenix makes the whole thing watchable—but it wasn’t as subversive or relevant as Phillips wanted it to be, not after what has come before it (Watchmen and Vendetta were both made into films, don’t forget). While I give Phillips credit for trying to make a superhero, or in this case, supervillain movie, something different than the usual Marvel fast food (which still counts as “cinema,” no matter what Scorsese thinks), this doesn’t quite clear the hurdle.
Posted by Rich at 7:00 AM