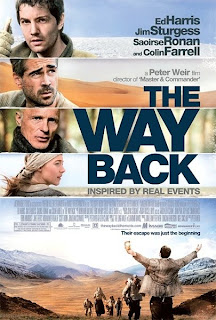 Sometimes I just get stuck for inspiration. I saw The Way Back the other day and liked it, but for whatever reason I had a problem trying to write about it in any way other than a simple review - which, as you know by now, is something I try to avoid with this blog.

The film itself is something far beyond my experience. I can't really say that I've been in any life-or-death situations. I've never seen a desert first-hand, or been to Siberia. I've never seen the inside of a prison and I'm not Polish. I've taken plenty of long walks in my life, but I think it's safe to say that they all pale besides this long walk - and I didn't want to write anything about the noble struggle of man versus nature or anything like that.

I thought about writing about director Peter Weir, whose work I like. I've seen many of his movies, but the only other one I feel I could write intelligently about is The Truman Show, since I've seen it so many times. Actually, I started reading the book Master and Commander recently, but I got bored with it.

I could say a few words about the Kew Gardens.

On Tuesdays (and Thursdays), admission is $7, so you'd think there'd be a bit more of a crowd. Sometimes there is, but I think it depends on the movie. The Way Back is rather grim; something like The Kids Are All Right or The King's Speech had bigger crowds. Sometimes I worry that this theater won't be able to sustain itself. I love that it's a cheaper alternative to the Angelika or the Sunshine, and I'll continue to support it as long as it remains so, but I guess I need some reassurance that it's doing okay. Maybe I should see a show there on the weekend as a basis for comparison.

Then there's the neighborhood. Lately whenever I go to Kew Gardens for a movie, I've been eating at a tiny little pizzeria across the street from the theater. It's so tiny that it has an old-fashioned counter with stools. The pizza there's decent. The place I really like to eat at, though, is this broiled chicken place next to the subway. They served broiled chicken with rice and pita bread, or with a salad, and all for a nice price.

So I guess I managed to generate a little something... even if it's not the grand essay I had hoped it would be.
Posted by Rich at 9:57 AM