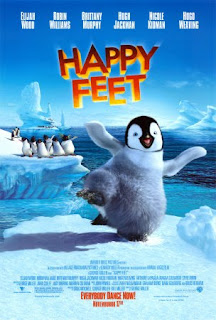 What lengths would you go to in order to see a free movie? Would you sit out in 20 degree weather in the dead of winter? No? I don't blame you. You're probably not a film nerd looking for material to write about in your blog.

Every year, Bryant Park in midtown Manhattan hosts a free outdoor film festival during the summer, where they show a bunch of classic films. They're extremely popular, and it's one of the best summer attractions in New York. In recent years, Bryant Park has also built a temporary ice skating rink during the winter, and that too, has been a smashing success. Well, some genius got the bright idea to combine the two, no doubt thinking that, like chocolate and peanut butter, it would be two great tastes that taste great together. So this past weekend saw the debut of the Bryant Park Winter Film Festival. Yes, that's right, you can ice skate and watch movies at the same time! How brilliant is that?

The festival began last Saturday with Happy Feet, which, in all fairness, is an awesome movie, one I considered worth enduring sub-freezing temperatures for. The programmers thought it would be cute to show winter-themed movies. In addition to this, they're screening March of the Penguins, Ice Age, Blades of Glory and The Cutting Edge. They do not screen summer-themed movies at the Summer Film Festival.

The first time I saw Happy Feet was when it initially

came out. I went with Jenny. We had dinner first. I forget what I had, but it definitely did not agree with me, because during the movie, I started to feel sick, and I mean violently, stomach-churning sick. About a third of the way into the movie, I had to go to the bathroom and throw up. I stayed in there awhile too; Jenny had to get an usher to check in on me. I didn't have the constitution to finish the movie, so we left. Jenny, thankfully, understood; she could see that I was messed up. I didn't have to go to the hospital or anything, though.

I didn't have any such problems Saturday night. The skating rink at Bryant Pond is in the middle of the park, built over the lawn. It actually only takes up around half the space of the lawn, give or take. In addition to the rink, there's a temporary two-floor restaurant with floor-to-ceiling windows so you can watch the skaters (and the movie), as well as a smaller concession stand. The large movie screen is set up on the west side of the rink, next to the fountain, the same spot where it's set up in the summer. The weather was in the mid-20's when I left my house in the morning, and while there was some wind, it wasn't particularly harsh. The early evening sky was clear, which was a big relief; we've been getting hit hard with snow in the past few weeks.

I had a nice spot picked out - almo 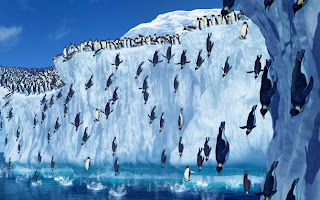 st dead center of the screen, directly behind the rink, on the platform to the left of the restaurant. There were chairs and tables scattered around the platform; I grabbed one of each and sat down. It was about 45 minutes or so before showtime and there were about a dozen to fifteen other people sitting around me. One couple had a blanket to cover their legs. The guy to the left of me brought his baby son, and at one point he took him out of his stroller and let him wander around in the snow next to the rink.

As the movie played, I glanced at the skaters from time to time. They didn't appear engaged in the film to any great degree. They were simply going around and around. Who could say whether they even came for the movie? I doubt it. If I were out there on the ice, I probably would have a hard time focusing on the film too. As for the people around me, they stuck it out in the beginning, but as it got progressively colder, they left, one by one. I had bought a hot apple cider ($3), but it went in a hurry and didn't do much for my system.

About halfway into the film, I got up to go to the bathroom, and my legs and feet were in pain! I had been moving them around to keep my blood circulating, but it didn't do much good - I could barely stand upright and had to slowly shuffle across the rear end of the park like a zombie. When I came back I opted to watch the rest of the film standing up, stomping my feet repeatedly in a vain attempt to stay warm. By this point the thin movie-watching crowd thinned out even more. The moment the movie ended and the closing credits began, I high-tailed it out of there in a bee-line for the subway and didn't look back. I just wanted to feel warm again.

Needless to say, this was a bad idea. For one thi

ng, the sound system, while not bad, could have been better, and anyway, the noise from the skaters made listening to the film a bit of an effort. If this was my first time seeing it, I'd likely be even more frustrated than I was. Also, I don't understand who this is supposed to be for: the skaters, most of whom weren't paying the slightest bit of attention? Or the minuscule band of movie watchers who were freezing their asses off, most of whom gave up trying to sit through the cold before the movie was half over? I figured I'd try it at least once to see if I could do it, but there's no way I'm ever gonna do this again - not in 20 degree weather, in back of a skating rink full of people!

So what's the craziest thing you've ever done to see a free movie?
Posted by Rich at 8:45 AM