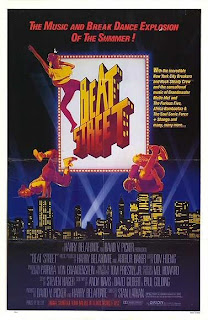 The closest I ever came to being a deejay growing up was making my mix tapes. I was a total Top 40 nerd as a kid - I consumed just about everything on the radio, no matter how crappy. Now, of course, there were singers from the 80s whose music has stood the test of time - Michael Jackson, Madonna, Prince, Cyndi Lauper, Duran Duran - but thanks to my numerous mix tapes, I preserved the mediocre ones as well.

In the 70s, the radio station of choice in New York was WABC, and I remember listening to it, but when Z100 came along in the 80s, I made the switch, and most of my mix tapes were made from there. Of course, I'd never miss "American Top 40" with Casey Kasem every week, a show I took very seriously, because how else would you know which songs are the best? (I think it was WPLJ that syndicated his show back then.) Free thought and individual taste would come later in life; keep in mind I was only ten or so.

The mix tapes were inspired by my father, who had the most incredible record, tape and 8-track collection - and he was always making mix tapes. His music was R&B and country. He'd buy blank tapes by the dozen, Maxell or Sony usually, then record the music off of his records, and write the names of the singers on the labels. He had the best handwriting of anyone I knew, and his labels would always look sharp, so I knew my mix tapes had to look just as good. I numbered each one - "Volume 1," "Volume 2," and so on - and carefully wrote out on the labels both the song title and artist of each song on the tape. My father bought me a spinner rack to shelve my mix tapes, which grew with each year. It was my pride and joy as much as my father's tapes were his.

Occasionally I'd take them to parties at school 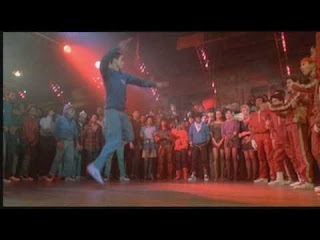 . I made my mix tapes for me above all else, and I never put much thought into things like sequence or theme. I never tried to make a tape specifically for parties. The thought may have occurred to me at some point or another, but I was more interested in making them for my personal enjoyment. Generally, my tastes were the same as everyone else's in junior high, so if I played one of my tapes at a party, my choice of selections was rarely an issue. Rap music was part of everything else on the radio, so Run DMC and Whodini and UTFO and LL Cool J and the Fat Boys were as much a part of my volumes as anything else popular at the time.

In college, I actually was a deejay at our radio station for a semester, and that, obviously, was a very different experience. I still tended to gravitate towards songs I'd first heard on the radio, although this time it was classic rock that informed my choices instead of pop. I did, however, mix pop songs from my youth in with Led Zeppelin and the Rolling Stones, and I even made it a point to include one song a week from my father's collection, which he generously permitted me to do. I'd record my hour-long sessions and play them back for him to hear. I think he was impressed.

Beat Street is a mostly-sanitized versio 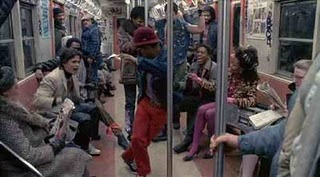 n of the house party experience as it was in the early days of hip hop, which I was far too young to have known about. I've done some reading, however, so I now know that it features many of the pioneers of hip hop throughout the movie in supporting roles, including two of the greatest deejays of all time - Afrika Bambaataa and Kool Herc.

The highly-recommended book Yes Yes Y'all: The Experience Music Project Oral History of Hip Hop's First Decade compiles interviews with numerous hip hop veterans, including Bambaataa and Herc. They both talk about putting on shows in the Bronx in the 70s and how they worked at making their venues safe for all who came. Herc was the one who would play hard-to-find R&B and funk music never heard on the radio, while Bambaataa was the one who'd mix in unusual beats and sounds with his diverse range of music, as well as establishing a sense of community.

Going by what I've read in that book, Beat Street

seems to get it mostly right: hooking the sound system up to a telephone pole, frisking people at the door, b-boy battles, and so on. It's a Hollywood version of the whole experience, so you've also got the obligatory love story subplot and the Big Show at The End where everyone comes together, but despite the rotten acting and cheesy script, there does seem to be a feeling of sincerity to it all. And Rae Dawn Chong is adorable.

Harry Belafonte was a producer. Here's a great quote from him from Jet Magazine: "What appealed to me [about the movie] was being witness to the creation of a real folk art that developed under its own steam. The entertainment industry didn't create this. It was born on its own and it will go at its own pace to its own conclusion."
Posted by Rich at 9:18 AM