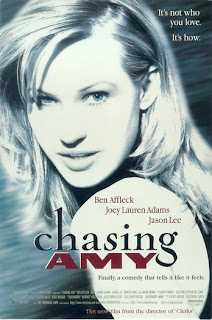 I first met Jenny in about 1995-96 when we were both part of a club for comics creators. I had only recently gotten back into reading comics, and I had begun making my own as well. I still had an interest in superheroes, but I was also discovering the work of UK writers like Neil Gaiman, Alan Moore, and Grant Morrison, and wanted more challenging material. Jenny's tastes ran towards "underground" material, like Roberta Gregory and Peter Bagge, and through her I discovered an even wider range of comics than I ever knew existed before, one I found both bizarre and thrilling.

Jenny lived in the East Village at the time, and we'd often hang out in the area, going to bars and such and checking out bands. I'd explored the Village lots of times before, but seeing it from her perspective - a decidedly punk one - made it look different all of a sudden. She was in a punk band herself around this time, and she totally got off on dressing up in outlandish get-ups and prancing around the stage screaming songs about murder and mayhem and farm animals.

She wasn't someone who I would've imagined falling for. We were so ve

ry different; I mean, I was a complete square in comparison, but I was entranced by her. She'd gone through some seriously rough times in her life, and was still struggling through them to a degree, but she persisted, and she took all her anger and pain and frustration and turned it into art - both her comics and her music. She knew how to have a good time. And she was cute.

I don't wanna get into what happened next, because I don't like bringing it up again (and certainly not in a public venue like this), but suffice it to say that Jenny and I ran into some turbulence for awhile, but we eventually dealt with it. We never actually became a couple, but we remained friends, which I'm grateful for. Though our paths have taken very different turns since, I've never regretted a moment of our time together and I'm thankful I met her.

I saw Chasing Amy with Jenny and a mutual friend when it first came out and I identified with it immediately. How could I not? The circumstances were a little different - Joey Lauren Adams' character being a lesbian, for one thing - but it was so easy for me to imagine being Ben Affleck's character: a comic book creator in love with a girl far beyond his normal realm of experience. It gave me the courage to tell Jenny how I felt about her (though nowhere near as spectacularly), and though she didn't feel the same way, I never would've been able to do it in the first place if not for that movie. 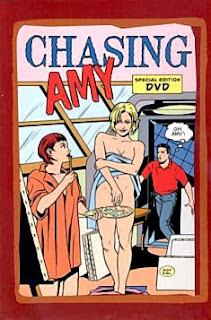 nt something special to me over the years. After it came out on DVD, I used to have a ritual where I'd watch it before going to a comics convention in Maryland that I always went to, one where I'd see many of my comics friends from around the country. I can quote so many lines from the movie. While I don't have the entirety of The Speech down, I can at least do the entire "Black Rage" scene, though I still can't do it without cracking up. Last night I watched it with the audio commentary on: Kevin Smith, Ben Affleck, Jason Mewes and members of the production team, and they were all having a good time talking about making the movie.

I love this movie for many reasons... but mostly because it reminds me of Jenny, and the good times we had.

Any other fans of alternative comics out there?