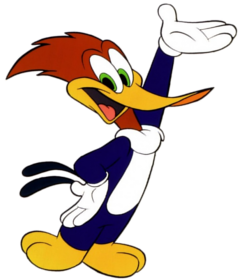 Back in the 70s and 80s, it was still possible to see animated shorts that originally played theatrically on free television, so the newer, made-for-TV cartoons I watched as a kid were mixed with much older material.

The animation career of Walter Lantz goes all the way back to the silent era. At Universal, he directed Oswald the Lucky Rabbit shorts and his studio created Woody Woodpecker, Andy Panda, and Chilly Willy, characters that played on TV beginning in the late 50s.

Tex Avery began at the Lantz studio and helped develop the Looney Tunes characters at Warner Bros., but in 1942 he moved to MGM, where his cartoons took on an even wilder tone. In addition to creating new characters like Droopy Dog, he directed memorable shorts like “Red Hot Riding Hood” and the controversial “Magical Maestro” (which is hilarious; I don’t care what anyone says).

Paul Terry co-founded Terrytoons in New Rochelle, New York in 1929, and among the studio’s best known creations include Mighty Mouse (another superhero) and Heckle and Jeckle (a comedy duo). 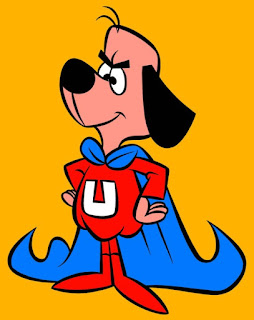 In 1964, cereal maker General Mills was the sponsor of the NBC series Underdog, a show featuring characters made specifically to promote GM cereals. The title character was a funny animal superhero; there was also Tennessee Tuxedo and Go Go Gophers, among others. W. Watts Biggers and Joe Harris created the show for Total Television.

Like Rocky & Bullwinkle, the Underdog segments were serialized. It was the Superman story all over again: secret identity, girl reporter/secret crush, archenemy, etc. Great theme song.

The superheroes of Marvel Comics first saw life in animation in 1966 and continued through the combined efforts of Grantray-Lawrence (with Spider-Man ‘67 and Marvel Super Heroes), Hanna-Barbera (with Fantastic Four) and DePatie-Freleng (Spider-Woman).

In 1981, Marvel Productions was formed, and in addition to Marvel-related series like Spider-Man ‘81, Spider-Man and his Amazing Friends, Incredible Hulk ‘82, and the first X-Men pilot, Pryde of the X-Men, they put out some of the biggest hits of the era: GI Joe, Transformers, Jem and the Holograms, Muppet Babies, Fraggle Rock and Dungeons and Dragons. 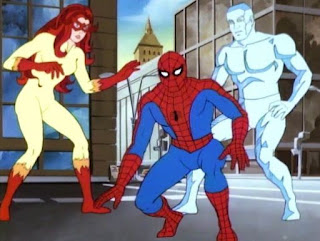 “Spider-Friends” was a tweaking of the Spider-Man mythos, in which he partners with two mutant superheroes: Iceman, an original X-Man direct from the comics, and a new character, Firestar (should’ve been the Human Torch but they couldn’t get the rights). You can probably guess from their names what their powers were. They have a hidden crime lab in Spidey’s apartment of which Aunt May was somehow completely unaware.

The animation was good and a number of prominent heroes made occasional guest appearances. Since I had just begun reading Marvel comics around this time, you can imagine how excited I was to see them. The premise may have deviated far from canon, but that didn’t bother me as much as you might suspect. It and Hulk were narrated by Stan Lee, so that made it extra legit in my eyes. 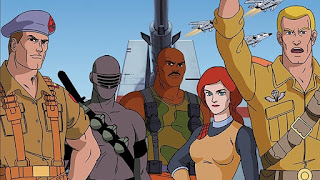 I watched GI Joe and Transformers (both of which had Marvel comics of their own at the time), but for some reason, I wasn’t a huge fan of either, unlike many kids of my generation. I wish I could say why. Was it because the Joes didn’t have superpowers? Was it because TF was set on Earth instead of in space? Not sure. The animation on both shows was good and there was plenty of action to be had, but to my ten-year-old mind, it wasn’t quite enough.

D&D, on the other hand, really had a hold on me. I played the game a little in junior high but was no damn good at it, so I had no prior affinity with the property. Didn’t need one. The writing was good, the characters distinctive and the adventures entertaining.

It was developed for television by Mark Evanier, a very talented writer with an encyclopedic knowledge of the entertainment industry in general and television in specific. During the same time, he also wrote comics, mostly with Mad Magazine illustrator Sergio Aragones. 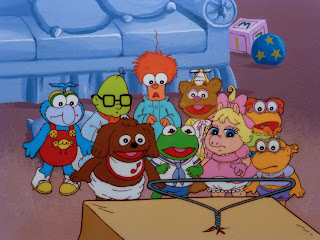 As a Muppet fanatic already, an animated series featuring the Muppets as kids needed no hard sell for me. Jim Henson Productions co-produced the show and Henson himself was executive producer for three of its eight seasons.
We all remember the Peanuts specials, but do you remember the Saturday morning series? The Charlie Brown and Snoopy Show had pretty much everything about the familiar characters you know and love, produced by the same team behind the specials, Bill Melendez, Lee Mendelson and creator Charles Schulz. It only lasted two seasons, though I watched both. I guess people prefer Peanuts on an occasional basis. (Here’s a ranking of all 45 specials.)

A quick word about live-action shows: in addition to Shazam! and Isis, the ones most people remember from this era are those from Sid & Marty Krofft: psychedelic, candy-coated series that combined actors with life-sized puppets in surreal settings, such as HR Pufnstuf or Lidsville. I liked Sigmund and the Sea Monsters, a show with a boy who befriends a bizarre sea creature, and Land of the Lost, about modern-day explorers trapped in a prehistoric dimension. The Kroffts also designed the look of HB’s live-action Banana Splits. They recently got a star on the Hollywood Walk of Fame.

There are probably more shows I don’t remember, but I think I hit on most of the prominent ones. I don’t think I could pick one cartoon I loved over and above the rest. Was it Battle of the Planets? Dungeons & Dragons? Muppet Babies? Animaniacs? Batman? I couldn’t tell you—but I still remember the feeling watching those shows as a kid gave me. There was nothing quite like it.