In praise of the cartoon voice actors 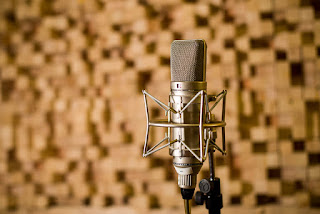 If you’re a professional actor, voice acting for cartoons sounds easy, right? Just speak into the mike and do what you normally do. But for those who have made careers embodying animated characters on television, it can be almost as involving as live-action; certainly as meaningful.

I’m gonna stick to TV for this post; I imagine many of us have at least a passing familiarity with the voice talents who originated in the movies: Clarence Nash, Pinto Colvig, Chuck Jones, Arthur Q. Bryan, Mel Blanc, Daws Butler, to name a few. And I’m only highlighting a few among many.

—Alan Reed and Jean Vander Pyl voiced, among other characters, Fred and Wilma Flintstone. He got his start in radio, appearing in The Shadow, The Life of Riley, The Phil Harris-Alice Faye Show and Crime Doctor, as well as the movies (including Disney’s Lady and the Tramp) and early TV. She also started in radio, appearing in The Halls of Ivy and Father Knows Best, as well as TV. She was in the original Flintstones pilot, when the show was still called The Flagstones.

While Fred and Wilma were visually inspired by The Honeymooners’ Ralph and Alice Kramden, the voices were not. Fred had Ralph’s temper, but not his Brooklyn accent, while Wilma seemed a bit less sassy than Alice. Their voices fit their looks: Fred’s voice was heavy and earthy and Wilma’s was light and thin. 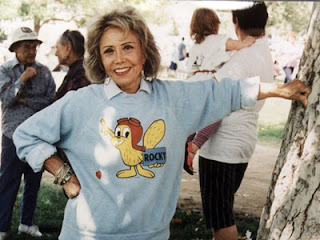 —June Foray had a long and distinguished career in voice work, embodying a wide variety of characters, but she might be best known as the voice of Rocky the Flying Squirrel of Rocky & Bullwinkle fame. She was also Natasha from the same show, Nell from Dudley Do-Right, Granny from the Sylvester & Tweety cartoons... you know what, just watch this interview with her, because she really was a legend in the field.

It was Foray who founded the Annie Awards, the Emmys of animation. Her husband came up with the name; “annie” being short for animation. She won two of them herself, in 1997 and 1998, for voicing Granny in The Sylvester and Tweety Mysteries. 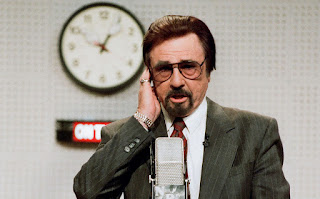 —Gary Owens was perhaps better known as an announcer for shows like Laugh-In, but he was also the voice of three distinctive cartoon heroes: Roger Ramjet, The Blue Falcon and Space Ghost.

I had never thought of Space Ghost’s voice as being campy until the character was reincarnated in Space Ghost Coast to Coast, the Cartoon Network show that redubbed old SG episodes in a new context. Truth is, SG aired around the time as the Batman TV show, which was hugely popular. I suspect Owens drew upon that in his characterizations of both SG and BF.

Owens was a radio DJ as well as an announcer; plus he wrote for Jay Ward; made a comedy record with Foray, Butler, Paul Frees and others; lent his voice to Disney’s EPCOT Center, and appeared in a variety of venues throughout TV, the movies and radio. 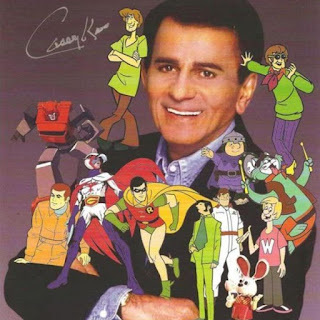 —Casey Kasem was also better known as a DJ, but he did extensive cartoon voice work. He was Shaggy on Scooby-Doo, Robin on Superfriends, and Mark on Battle of the Planets, among others.

Because I was a huge fan of his syndicated radio countdown series American Top 40, I was vividly familiar with his voice, so it wasn’t hard to spot it in my favorite cartoons. It was also fun to imitate! Kasem worked with Owens at radio station KEWB in Oakland, and once Owens filled in for Kasem on AT40.

—Peter Cullen was the voice of Eeyore on Winnie-the-Pooh and did voice work in shows like The Jetsons, The Smurfs, Spider-Man and his Amazing Friends, Alvin and the Chipmunks, Voltron, Chip ‘n Dale: Rescue Rangers and lots more, but he has been immortalized by fandom as the voice of Optimus Prime from Transformers. The story of how he got the part is interesting.

He is so intrinsically linked with Optimus Prime that he was the voice of the character in Michael Bay’s live-action TF movies. In 2019 Cullen received a Lifetime Achievement Award specifically for voice actors. 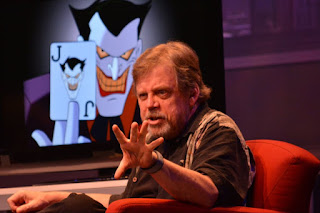 ——I’ve talked about celebrities doing voice work before, but Mark Hamill deserves special recognition in this field because for him, it has become a second career.

Long before he first picked up a lightsaber, he appeared on the I Dream of Jeannie cartoon Jeannie, plus he had a role in the animated cult film Wizards. Throughout the 80s, he tried to distance himself from his signature role, which made him a geek superstar, but also pigeonholed him in a way that his co-stars Harrison Ford and Carrie Fisher avoided.

In 1992, he joined the voice cast of Batman: The Animated Series as the Joker, and it changed his life. He, perhaps more so than Caesar Romero and Jack Nicholson before him, nailed not only the character’s macabre humor but his menace.

Now Hamill is known and celebrated for being a voice actor as much as being a Jedi knight. Here’s a top ten of his better-known voice roles. Earlier this year, it was announced that Hamill would voice Skeletor in Kevin Smith’s Masters of the Universe reboot.

Voice actors have gotten more recognition these days, as they should.

How does one become a voice actor?