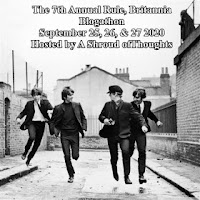 The Rule Britannia Blogathon is an event celebrating British cinema, hosted by A Shroud of Thoughts. For a complete list of participating bloggers, visit the link at the host site.

Back in May we talked about the writer-director team of Powell and Pressburger, and I’m glad for the opportunity to discuss their movies again. They were beautifully made, with stunning cinematography and lush, vivid color.

If I ever saw Black Narcissus before, I don’t recall. All I knew about it was it had creepy-looking nuns doing nun stuff, but to be more specific: Deborah Kerr establishes a hospital and school with a group of her fellow nuns in the Himalayan mountains of India, but the atmosphere drives them all a little cuckoo. It’s based on a book.

Okay, first of all, I thought for sure that they shot this film on location somewhere in the Himalayas, but it was (mostly) done indoors! Specifically, it was shot in a studio with matte painting backgrounds, so perhaps we should talk about that. Back in the prehistoric days before digital effects, matte paintings were used to help create the illusion of a landscape by painting on a glass pane and combining the film of that background image with a foreground filmed image of actors on a set. This article explains the process pretty well.

For BN, W. Percy Day was the matte painter whose team created all those mountains. His work goes back to the silent era in the French film industry (he worked on the epic Napoleon) and collaborated with many of the British film giants: Hitchcock, Olivier, Korda, Menzies, Lean. Day’s two sons followed him into filmmaking, as a draftsman and a cameraman, and often worked with him and Day’s stepson, also a matte painter. 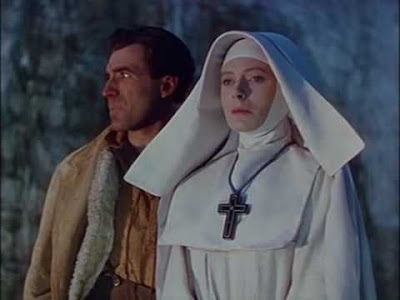 BN was shot at Pinewood Studios in Iver Heath, 17 miles west of London, a former country club converted into a studio by a pair of millionaires, Charles Boot and J. Arthur Rank. It opened in 1936, and the list of films produced there over the years is long, from The Red Shoes and Dr. No and Goldfinger through the first three Alien films and Superman II and III and Mission: Impossible to Skyfall and the last two Harry Potter films and the Hobbit trilogy and the last three Star Wars films, and plenty more.

The great Jack Cardiff shot BN. An industry veteran from the age of 15, he worked on the first British Technicolor film, Wings of the Morning from 1937. During the war he worked on government-sponsored shorts. BN was his sixth film as DP, including the previous P&P film A Matter of Life and Death.


He was inspired by the work of classic fine artists such as Vermeer and Caravaggio to use what he called “simple light” on the sets. He went on to win the Oscar for cinematography. The film also won for Art Direction.

BN is an unusual story, to say the least; a combination of the foreign environment and their own secret longings and memories messes with the nuns’ heads to varying degrees. There are plenty of lingering and meaningful looks and elliptical close-up shots, some bathed in light, others lurking in shadow.


Kerr’s tremulous voice always made her sound like she was on the verge of breaking down in hysterics, so this was a perfect part for her; indeed, this was her breakout role. Her next movie after this was with Clark Gable. From Here to Eternity came six years later. Would you believe Michael Powell originally wanted Garbo?

Let’s spend a minute on the actor known only as Sabu, who played the young Indian general that sponsors the nuns’ school and hospital. His was quite the story: discovered by director Alexander Korda as a 12-year-old in India cleaning elephant stables for the maharajah in his town, he played the lead in the 1937 film Elephant Boy. 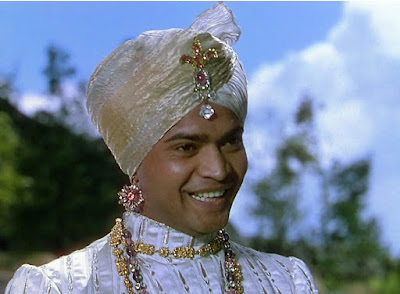 Sabu and his older brother became wards of the British government, and as a movie star, he was an overnight sensation. American audiences may know him best for the remake of The Thief of Baghdad, also directed by Korda. By the time Sabu made BN his novelty began to wear off, having suffered the unfortunate consequence of growing up—but he’s good in this one.

In the US, the Catholics complained about BN and demanded some scenes be cut, including the flashbacks to Kerr’s life before she became a nun, plus certain lines that could’ve been considered provocative if you have a stick far enough up your ass. Fortunately, time has treated BN very well; it survived censors’ cuts and became an all-timer of British cinema.