Books: The Dreams and the Dreamers

The 2020 Summer Reading Classic Film Book Challenge is an event in which the goal is to read and write about a variety of books related to classic film, hosted by Out of the Past. For a complete list of the rules, visit the website.

Hollis Alpert founded the National Society of Film Critics in 1966, when he wrote for the Saturday Review. Pauline Kael was a founding member.

Basically, they were a bunch of New York critics who couldn’t get into the more prestigious New York Film Critics Circle, which included major newspaper critics like the New York Times’ Bosley Crowther. Though they were New York-based, the magazines they wrote for had national circulations, hence their name. Every year they hand out best-of awards and are considered a major stop on the road to the Oscars. 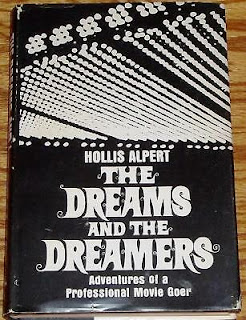 Alpert wrote a number of novels and film-related books, including biographies of Federico Fellini and the Barrymore family. In 1962, he collected a bunch of his Saturday Review columns into a volume: The Dreams and the Dreamers: Adventures of a Professional Movie Goer. This is another book from Bibi’s library’s collection of discarded books that she sent to me.

This book was of interest because of the period it covered: the early 60s, when the Hollywood studios were on the decline. Alpert discusses the rise of foreign filmmakers, the actor-producer in Hollywood, film vs. theater, movie censorship, the pay-per-view TV experiment, and profiles people such as Alfred Hitchcock, producer Ross Hunter, and actress Jean Seberg.

In his introduction, he discusses the evolving perception of film and film criticism, as a result of what was then a new level of discourse: classes on film in universities, art house cinemas springing up in big cities, serious discussion of movies in other countries like France. He concludes this new audience needs a new kind of critic:


...The movie critic can no longer get by with a slapdash attack on one movie, panegyric of enthusiasm for another. More, whether he knows it or not, is demanded of him. He is expected to have some more than cursory acquaintance with the fields of literature, theater, philosophy, science, art, and music—for movies, inevitably, when they are serious, and even when they are not—touch on all these fields. Sad to report, the average movie reviewer, by and large, is simply not up to the movies he writes about. He may feel at home with a film in which Rock Hudson and Doris Day engage in a game of mistaken identities, but some other level of evaluation is required of him when he deals with Antonioni, Resnais, and Bergman (Ingmar, not Ingrid).

I understand that much. Thanks to the Internet, I can sound like a big shot if I want to whenever I write about movies, and I grok the necessity of expanding one’s sphere of knowledge in evaluating a work of art such as film, but as I’ve said many times, I do not consider what I do “film criticism,” even now, ten years later.

I don’t actively search for the Big Meanings in movies or analyze the style of a particular director or actor unless I feel a strong need to, usually as a result of some personal connection I’ve made with a movie, and if I do, I’m as likely to disagree with the prevailing wisdom as anything else, for reasons I may not be able to fully articulate.

I’m just not that good a film writer. Besides, I like to have some fun in writing about movies, and at times that has meant writing in a... non-standard format. Long-time readers will know exactly what I mean.

Alpert’s writing is illuminating in some places, boring in others, yet definitely written from a distinct point of view. Not quite as lively as reading Kael or Roger Ebert, but as a portrait of world cinema in a critical time of transition, it’s not bad.