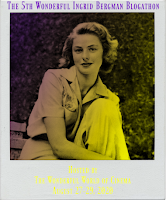 The 2020 Wonderful Ingrid Bergman Blogathon is an event in tribute to the classic Hollywood actress, hosted by The Wonderful World of Cinema. For a complete list of participating bloggers, visit the link at the host site.

Ingrid Bergman first met Roberto Rossellini in 1949. The Hollywood actress from Sweden was so impressed with the Italian director’s work she wrote to him, wanting to collaborate with him.

At this stage of her career, Bergman was a superstar, known for such films as Casablanca and Gaslight, plus her projects with Alfred Hitchcock, Notorious, Spellbound and Under Capricorn. Making a movie outside of the Hollywood bubble, with an unfamiliar foreign filmmaker, was a risk, but one she thought worth taking.

The result was the movie Stromboli, released a year later. In the process, the married Bergman had an affair with Rossellini, who was separated from his wife at the time. The actress and director had a son, who was born two weeks before the American release of the film... and that was around the time Bergman’s troubles really began. 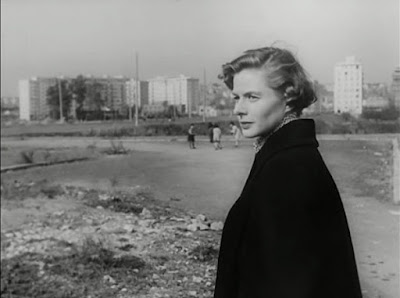 For decades in America, actors had a reputation of being no good morally, and not entirely without reason. One of the first film superstars, Mary Pickford, the woman they called “America’s Sweetheart,” cheated on her husband with Douglas Fairbanks, and they married only weeks after she got a divorce. Katharine Hepburn dated the married Spencer Tracy for decades, knowing he would never divorce his wife. Though their eventual marriage was one of the happiest and longest-lasting in Hollywood history, Joanne Woodward and Paul Newman met when he was married and had three kids. (I personally am not judging; I’m just providing examples of affairs that were not met with the level of scandal that Bergman’s was.)

There are lots of other examples of Hollywood marriages undone through extramarital affairs that were overlooked, but when Bergman had hers, all of a sudden people lost their damn minds. It was as if the Pope was revealed to be secretly Jewish. I mean damn, a senator practically called for her head!

Was it really, as some have surmised, because audiences couldn’t separate the actress from the roles she played? She played a nun and Joan of Arc, so she must be good and pure? I can think of actresses who subverted their “good girl” image by playing bad girls and their careers weren’t hurt—Joan Fontaine, for one—but Bergman wasn’t acting in a role, was she? 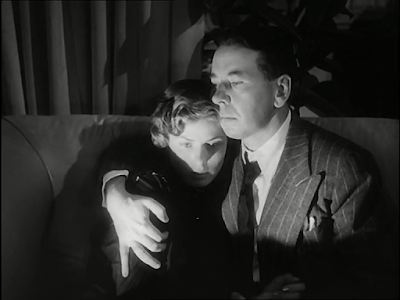 Was it because Bergman had Rossellini’s baby before she divorced her husband? I could understand that being a cause of scandal in the late 40s/early 50s. This sort of thing was why the studios had “fixers” like MGM’s Eddie Mannix, to keep the extracurricular activities of the stars out of the media. Who knows how many similar scandals we never learned about because they were never allowed to become part of the public record?

In the end, it probably came down to a simple matter of the double standard: women being unable to get away with things men could, though I’m not completely convinced of that because of the aforementioned examples I gave of overlooked affairs.

Bergman and Rossellini married in 1950 and in addition to the son, had twin daughters. You may have heard of one of them, actress Isabella Rossellini. (Here’s an interview where she discusses her parents.) The couple also made four more films together, including today’s subject, Europa ‘51. 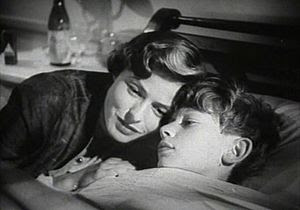 I’m not sure what I expected from a film with a title like that, but it definitely wasn’t a socially-conscious drama which tackles the class struggle head-on: When the son of neglectful parent Bergman commits suicide, she deals with her grief in ways that take her down unfamiliar paths in her otherwise-pampered life, to the point where she develops a Mother Theresa complex. But is her new attitude for real?

Europa struck me as a response to the controversy surrounding the affair by playing with Bergman’s “good girl” image. She starts out as a more-or-less ordinary woman, in deep mourning over what she believes is her fault: the suicide of her young son. It seemed to me she was overcompensating as a result of her tremendous guilt and looked for ways to provide unconditional love to prove she was still a “good” person (she admits to self-loathing at one point). There’s debate as to whether or not she’s crazy or just really, really good and selfless, and by the movie’s end, the people she helps rally to her defense and literally call her a saint—but we never learn what her ultimate fate is, because Italian Neorealism.

Bergman’s character reminded me of St. Francis of Assisi, the secular saint who lived humbly and found the spirit of the divine in all things—and indeed, his life was Rossellini’s inspiration for this movie, but Bergman never claims to follow a religious or political creed. She does what she does entirely on her own.

All the dialogue in Europa, like in many Italian films from this period, is dubbed, even though Bergman spoke five languages and probably could’ve learned Italian as well. It’s annoying to watch, but you just have to learn to accept it in watching old Italian movies.

Giulietta Masina is in this movie! She plays a factory worker raising a brood of little kids, some adopted. Bergman encounters her early on in her little odyssey. Once again, Masina is very different here than in her other films, and she’s not in it for very long, but I liked seeing her again.

Bergman and Rossellini divorced in 1957, but a year before that, she returned to Hollywood and made the film Anastasia and won the second of what would eventually be three Oscars. Her daughter Isabella has said that Ingrid made her peace with America before her death from breast cancer in 1982. A documentary, Ingrid Bergman: In Her Own Words, came out in 2015.