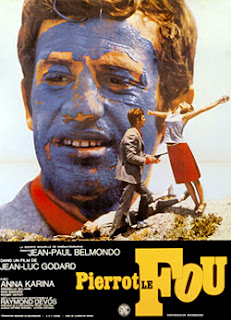 Okay, remember earlier this year when I talked about whether or not so-called boring movies had any value? I said that it depended on one's level of receptiveness, and that if you didn't like a certain movie, you shouldn't let other critics opinions of it sway you. I still believe that - but I'm kinda struggling with applying that belief myself here, so bear with me here.


As we come to the end of French New Wave Week, I've saved the biggest for last: Jean-Luc Godard. Like Francois Truffaut and others, a writer for Cahiers du Cinema prior to becoming a filmmaker. Also like them, started out doing short films before graduating to features (though Godard also made a feature-length documentary during this period). At Cannes in 1959, when The 400 Blows made its big splash, Truffaut introduced Godard to a producer willing to take a chance on him and the result was 1960's Breathless, the film, Godard said, that was the product of "a decade's worth of making movies in my head." And the hits just kept on coming. Contempt. Band of Outlaws. Alphaville. And much more. 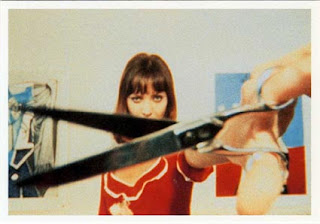 I understand that JLG did things in movies that nobody else had done before, like jump cuts. I understand that his films were radically different than others in terms of story and storytelling. And I understand that his influence could be felt in America, which led to a similar cinematic renaissance in the mid-60's and into the 70's. And maybe I just picked the wrong movie of his to watch...


... but Pierrot le Fou made no damn sense to me at all. I tried, I really did try to stick with this as long as I possibly could, but I bailed out just before the end, partly because I was running late with this post on account of not only being sick earlier this week, but massive schedule changes as well, partly because I got in late last night and didn't watch it like I had planned (I'll explain on Monday), and partly because I simply got tired of trying to make heads or tails of this movie, which so many people are convinced is a masterpiece of some kind. 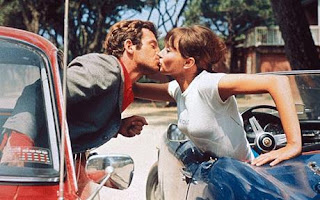 This isn't even my first JLG movie. That would be Contempt, but at least that had a naked Brigitte Bardot in it! This one has everything and the kitchen sink, plus the Liquid Drano, the scouring pads, the dishwashing detergent, the plunger, and even the tiles on the floor! On the one hand, it is undeniably audacious filmmaking of a kind never seen by anyone else before, but on the other, I didn't understand any of it, and I realize it may be possible that that was intentional on JLG's part.


Here's what I liked: The recurring motif of visual art throughout the film, even going so far as to inter-cut images from paintings and illustrations into the "narrative," such as it is. The vibrant color. The composition of certain images. The lovely shots of the south of France. Even the cameo appearance by Samuel Fuller.

That's about it. I can see some parallels to Bonnie and Clyde, another movie about two young lovers on the run committing crimes (and I have no doubt Warren Beatty and Arthur Penn were influenced by Pierrot), but to the extent that these "characters" are characters in any literal sense, I still need a reason to care about them, to stick with them for two hours, and JLG didn't give me one. Musical interludes aside, it's not light enough to be an escapist comedy, and it's not heavy enough to be a grim noir, and very little Jean-Paul Belmondo or Anna Karina said or did interest me, and the film trickery wore thin after awhile.


But it's a film that traditional film critics cream themselves over. I dunno. Like I said, I don't have the benefit of watching it in 1965, so I can only speculate, and read through historical accounts, about what watching a film like Pierrot back then was like, to see its impact from the point of first contact onward. Maybe I shouldn't need to do that. All I know is I gave it my best shot, and I will try not to let other people's opinion of it influence me. Though perhaps at some point in the future I'll watch another JLG movie.