Five juvenile ways to get adults to see 'Shame' 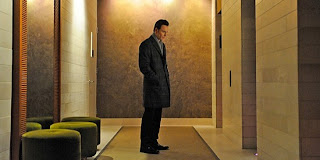 ...Hollywood is in agreement that Shame... represents the most important moment in years for the ghettoized NC-17 rating. Translated, the rating means "patently adult. No children allowed," according to the Motion Picture Association of America, which runs the ratings program with the National Association of Theatre Owners. Technically speaking, the rating means no children under 17 allowed, period. Shame is destined to push the boundaries of what's acceptable in the eyes of American moviegoers, as well as the willingness of theater owners to carry such fare and advertisers to carry promos for the movie.

"I think NC-17 is a badge of honor, not a scarlet letter. We believe it is time for the rating to become usable in a serious manner," says Gilula. "The sheer talent of the actors and the vision of the filmmaker are extraordinary. It's not a film that everyone will take easily, but it certainly breaks through the clutter and is distinctive and original. It's a game changer."

Fox Searchlight, a studio that has delivered some of the finest movies of the past decade, including Sideways, Little Miss Sunshine and Slumdog Millionaire, is prepared to put its money where its mouth is by not only accepting the NC-17 rating the MPAA slapped onto the controversial Michael Fassbender movie Shame, but using it as a selling point in a bold attempt to de-stigmatize the rating. More power to 'em, I say. In a culture that is perfectly okay with ever-escalating levels of gore and violence in films but shrinks in horror at even the suggestion of sex, I hope their efforts will begin to make people - especially theater owners - think twice about that sort of thing. How will they go about it? We don't know for sure just yet, but they could do a lot worse than take these suggestions:

- Reverse psychology. "Watch this movie? No, you don't wanna do that. Ladies, you don't have any interest in seeing this totally suave and sexy actor whom you loved in Jane Eyre earlier this year completely naked. Fellas, don't waste your time with a movie where you can see that hottie from Drive completely naked. Cinephiles, don't even bother seeking out this film from a critically-acclaimed director that took Best Actor at the Venice Film Festival and blew 'em away in Toronto. No, it's okay, really. I hear Adam Sandler's cross-dressing in his new movie. You go see that instead. It's fine."

- Guilt. "How can you not want to see this movie? Don't you know how fortunate you are to live in a country where we can see naked people whenever we want? Why, there are some countries that don't have any naked people at all. America's founding fathers fought and died for the right to see naked people, a right you should get down on your knees and give thanks for daily! You should consider it your patriotic duty to go see Shame, because if you don't... the terrorists have already won."


- Fear. "All your friends are gonna see it. Your boss is gonna see it. Way I hear it, he's gonna go with that dorky brownnoser who used to work in your department. Yeah, he's a dick, but he's a dick who makes more than you now. Bad enough your boss already thinks you're a little... peculiar for not coming to the staff bowling nights. Besides, what else are you gonna have to talk about on Monday morning - how the dryer at the laundromat broke on you again?"


- Bribery. "See Shame and we'll stop remaking 80s movies. Well, okay, maybe we can't speak for all the other studios out there, but how about this: see Shame and we'll make sure the next Die Hard movie is rated R like the last one should have been. How's that?"