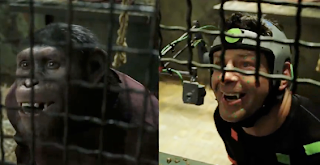 ...Fox's campaign for Serkis will test Oscar voters' willingness to acknowledge actors' work in the increasingly common performance capture field, in which the actions of human actors are recorded and used to animate digital character models. In Serkis' case, artists at the visual effects house Weta Digital transformed him from a curly-haired Englishman into a knuckle-dragging chimpanzee. Like John Hurt's Oscar-nominated performance in "The Elephant Man" in 1980, in which he was rendered unrecognizable by heavy prosthetic makeup, acknowledging the performance would require academy voters to take note of an actor without ever seeing his face.

So it's official: Fox will mount an Oscar campaign for Andy Serkis, in his computer-enhanced, performance-captured role as the super-intelligent ape Caesar in Rise of the Planet of the Apes. Once you take a few moments to fully understand how the P-cap process works and how it was applied to Serkis' role in Rise, I think you'll agree with me that his was one of the best acting performances of the year. Some people say that it's more the novelty of the performance (and the chance to make history with it) rather than the performance itself that's inspiring all this Oscar talk, which, I admit, is possible. Still, he made you believe in the character. Though not human, Caesar had human-like traits that grew and evolved over the course of the movie, and eventually you cared about what happened to him. Serkis made that possible. As much as I've talked about P-cap, it still amazes me that it's even possible. It truly is movie magic. 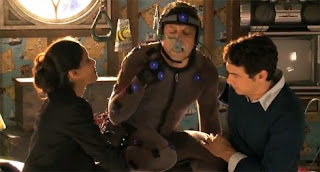 But can he get nominated? That's the big question. Let's look at his competition. Movie City News' Gurus o' Gold is a collection of the top Oscar prognosticators on the web. Every few weeks or so, they put their heads together and attempt to pick the frontrunners based on screenings, word of mouth, and intangibles. As of November 1, Serkis ranks 15th on their list of Supporting Actor candidates.

Currently atop the list is a pair of old-timers: Christopher Plummer for Beginners and Max von Sydow for Extremely Loud and Incredibly Close. Both have been around for decades, both are deeply admired as master thespians by the Academy, and both have never won Oscars. There will likely be a great deal of sentimental support for both men, which often translates into votes. I would count on both of them getting in.

Moving down the chart, the Gurus also predict Albert Brooks for Drive, Kenneth Branagh for My Week With Marilyn, and Jonah Hill for Moneyball. It's quite possible that at least two of these three can make it in. Branagh is playing an historical figure, actor Laurence Olivier, something the Academy always appreciates, and he has the rep. Brooks was very good in Drive, and as a funnyman, he'll come off great when he works the talk shows and Academy screenings. Hill played a pivotal role in a successful commercial film that will likely get a lot of Oscar love. The rest (before you reach Serkis) are mostly roles in films that are touted as surefire Oscar contenders in major categories, such as The Descendants, J. Edgar and The Girl With the Dragon Tattoo. 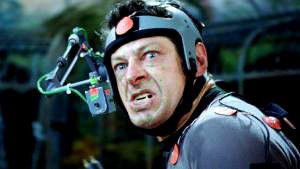 Honestly, I believe that no matter how much education Fox supplies on the mechanics of P-cap, Serkis' chances at a nomination are slim. It's still too much of a leap for most people to accept that what Serkis was doing was acting a role, the same way James Franco and everyone else in Rise was. There's also evidence that suggests the rendition from Serkis to Caesar was not perfect, and that's certain to have an influence.

Still, I believe we're only gonna see more roles like this in the future, not less, and at some point there will be a P-cap role that will be harder to dismiss. Naturally, I don't want all acting to go the way of P-cap; no one wants that and I doubt there's any danger of that ever happening. I do think this allows actors to expand the boundaries of what they can do in a movie, and if I were an actor, I'd find that exciting. Perhaps in time the Academy will agree.