Five movie crushes (and one actor I'd go gay for) 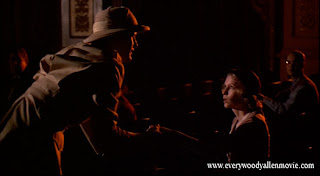 ... I think a real crush is when you like an actor so much you just can’t get enough of them. You want to see everything he’s ever done, and you’re willing to track down even the most obscure little thing you could find, even if he has only like 5-minute screen time. That’s what I did as a wee girl when I fell for Christopher Reeve in Superman. Or the time I ordered a DVD of this British sit-com Lucy Sullivan is Getting Married all the way from New Zealand because Gerry Butler has a part in it, ahah. Turns out to be a pretty funny show thankfully.

I haven't gone into much detail about the movie actresses I adore, for their looks as much as (or even more than) their talent. I devoted an entire week to Barbara Stanwyck, of course, but other than that, not much. No real reason; perhaps I might've thought it too self-indulgent. But my blog is nothing if not self-indulgent, so perhaps I should! In many of the film blogs I come across, it's a common practice for some of them to be decorated with images of the authors' favorite movie stars. Sometimes the association between blogger and beloved star extends to the former's identity. There's a blog I read in which the writer's Twitter handle, as I've recently discovered, is "ACaryGrantFan."

Norma Desmond says in Sunset Boulevard that silent film stars like her "didn't need dialogue. We had faces!" I suspect that was a major reason why film in general took off like it did: the instant attraction we, the audience, felt to those larger-than-life faces on the silver screen. When you see those faces act out a life, with or without sound, black and white or color, 2D or 3D, it can be pretty thrilling. Seeing these people big absolutely makes a difference in how we perceive them, so it's no surprise that we fall in love with them, in a vicarious way (most of the time).

The five movie crushes I've picked to talk about here cover a pretty wide portion of my life. There have been others, of course, but these five in particular, I think, portray the evolution of my cinematic tastes over the years. And just for laughs, I will even demonstrate how secure I am in my sexuality by naming an actor I would switch teams for! The lengths I go to in order to entertain you folks... 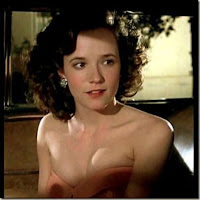 - Lea Thompson. I've written about the Back to the Future movies here before, but what I failed to mention was how utterly hot I was for Lea Thompson. It was that Enchantment Under the Sea Dance dress in the first movie that did it for me. This was 1985 and I was starting to really notice chicks in movies and on TV. Sixteen Candles and The Breakfast Club meant Molly Ringwald was everywhere, but while I liked her, I never really got into her movies at the time. I can't explain it. Wasted opportunity, I know. On TV, you had the girls of The Facts of Life. I loved Tootie and Natalie, not only because they were the cutest, but because they were closer in age to me and therefore more attainable than Blair or even Jo. (Remind me to tell you of the time I met Kim Fields years later.) Thompson in that dress, though, left a huge impact on my young and impressionable mind. I like to think my attraction to her was also because young Lorraine was a bad girl disguised as a good girl. Something about the way she played the Lorraine of the past excited me. She would prove to be a passing fancy for my fickle teenage mind, however. I never got into Caroline in the City and I was smart enough to pass on Howard the Duck. If the BTTF 25th anniversary pics of her are any indication, she still looks fabulous. And she's currently got a part in J. Edgar! 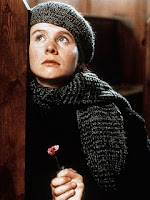 - Emily Watson. Common surnames aside, anyone who saw Breaking the Waves in 1996 will attest to how devastatingly, heartbreakingly beautiful she was in it. Falling in cinematic love with her was easy. Being naked helps. Being naked always helps! Hers is an unusual beauty: something about her eyes, or the shape of her mouth, is a little off-kilter from a Kate Winslet-type, but it works for her. I think it's those eyes. Her eyes are luminous and deep and aware. I couldn't have made the connection at the time I saw it, but the combination of her looks and the way Lars von Trier shot the film invites comparisons to similar European art-film beauties like Liv Ullmann. Waves came out when I was still in video retail and slowly teaching myself about film history, which made me a more discerning moviegoer, seeking out films like this. I fell for Watson pretty hard, and for awhile I sought out almost everything she appeared in. Some of it was good, like The Boxer and Hilary and Jackie. Some of it was mediocre, like Trixie. She hasn't become as huge a star as I hoped she would be, but at least she's still working. I had to pass on Oranges and Sunshine, her latest, because I can't see everything, but you better believe I'll be there for War Horse. 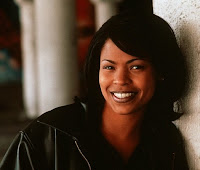 - Nia Long. Some people say 1997 was the year of Titanic. For me, it was the year of Nia Long and the two awesome movies she appeared in: Soul Food and Love Jones! The former, a heartwarming family drama; the latter, a smooth and sexy romantic film that doesn't pander to the usual rom-com cliches. And she rocks in both of them. Her beauty doesn't need too much explanation because it's a classic beauty: an easy, relaxed smile, lovely skin, a sultry voice - she's one part Angela Bassett, one part Diahann Carroll. You really need to see Love Jones; it's such a fun and enjoyable love story, and she makes the most of a great role. I also followed her in The Best Man, Hav Plenty, and Boiler Room, and for a brief moment it almost seemed like she was on the verge... Still, even if she doesn't get the Halle Berry roles, she has at least managed to sustain a strong television career. When they announced the new Star Trek movie, I wanted Long to be Uhura SOOOOOOO bad. I mean, like you wouldn't believe. Zoe killed it, but I still kinda wish I could've gotten to see my girl Nia instead. And oh yeah, here's Nia pulling a Demi Moore on the cover of Ebony. You're welcome. 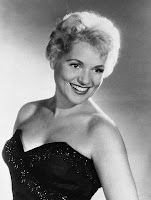 - Judy Holliday. Can we get some love for the old-school stars too? Why yes, I think we can. One day in the video store, sometime in the late 90's, Bill put on an old movie called It Should Happen to You. I immediately noticed that it was the great Jack Lemmon's first movie, but the star was a woman I had never heard of before named Judy Holliday. Ninety minutes later, I was absolutely smitten with her and wanted to see more. Now there are quite a few funny ladies I love dearly: Madeline Kahn (still miss her), Carol Burnett, Marla Gibbs, Kim Wayans, to name a few. But I can't begin to express the great amount of love and admiration and affection I have for Judy. She was so adorable you just wanted to hug her every time she was on screen. Her comedic genius was in the way she came across as the stereotypical dumb blonde at first, and then would subvert that image in unexpected ways. She was a little full-figured; that's always nice. And to be honest, if she had looked like Betty Grable or Carole Lombard, it would've been all wrong for the kinds of characters she played. Hers was a down-to-earth beauty. I had the great pleasure of seeing a Judy Holliday retrospective at Lincoln Center several years ago. It was the first time I saw her films on a big screen and it made me love them even more. If you've never seen any of her films, I urge you to seek them out. Born Yesterday is a good place to start; it's the one that got her the Best Actress Oscar. True, she beat Gloria Swanson in Sunset and Anne Baxter AND Bette Davis in Eve, and that's one we can debate over and over till the cows come home, but that doesn't diminish the performance itself. This is one crush I will never outgrow.

- Michelle Yeoh. I had mentioned this before when I talked about Crouching Tiger Hidden Dragon: prior to that movie, Michelle Yeoh to me was nothing more than an awesome, kick-ass action star and I respected her for that, but in Tiger, suddenly I saw her completely differently. Again, it must have been a combination of the way she was filmed and seeing her on a great big screen, but for the first time I was aware of how beautiful she is. And age has deepened her beauty, I think, made the contours of her face more pronounced. I've probably seen more of her HK films than her American ones. She hasn't been able to stray far from the genre niche, unfortunately, but I have high hopes for The Lady, her upcoming pic, even if it doesn't get her a Best Actress nomination. If you have a half hour to spare, check out this video interview of her, which covers most of her career, with an emphasis on The Lady, naturally.

And as for that one actor, well, I could take the obvious route and say Clooney or Pitt or Damon, but that's not saying anything new. This choice probably isn't, either, but so what: I'll pick Social Network and J. Edgar star Armie Hammer. He has that neo-classical Adonis look that Brendon Fraser had in his youth that, I must admit, makes him a sight. I remember thinking at one point that he should've been cast as Superman.

So now it's your turn. Give with your cinematic crushes.
Posted by Rich at 8:43 AM