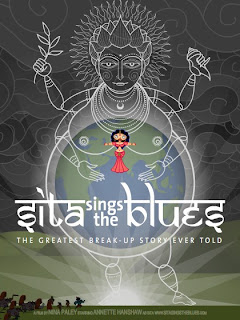 The Wexner Center for the Arts has got to be one of the best kept secrets around in terms of public art institutions. This was one of the many things that made me proud to live in Columbus, if only for a brief time. Located on the Ohio State campus, the Wex showcases a wide variety of exhibits year-round, from music to film to art and more. When I was in Columbus, they had a massive Andy Warhol show that was unique in all the country, and attracted visitors from around the world for months. (I even mailed Vija a copy of the program.) In describing the Wex to my friends back home, I'd compare it to the Brooklyn Academy of Music or the Museum of Modern Art. I can't recommend this place enough if you're in the area, or even if you're visiting Ohio in general.

The Wex screens a variety of international films, past and present, occasionally before anyone else. I saw the Bobby Sands biopic Hunger there before it came to New York, if you can believe that. Often times, the filmmakers appear for Q-and-A sessions. In the summer, classic films are screened outdoors, on the front plaza, with local businesses providing food and drink.

I had first read about the one-woman-animated feature Sita Sings the Blues from Roger Ebert's blog. By the time the film came to the Wex in early 2009, I knew I had to see it. By chance, a couple of old friends from Michigan, Sean and Sophia, were planning to come down to see it as well. Unfortunately, they could only come for the Saturday show, not the Friday night one in which creator Nina Paley would attend for a Q-and-A. A tough decision to make, but I decided to wait the extra day.

Part of what fascinates me about this film is how Paley was able to not only make art out of a personal tragedy in her life, but to find relevant inspirations in other media and other cultures that she could incorporate into her work. Between the Hindu trappings, the 1920s blues music, and the present-day story arc, Sita is a remarkable mash-up of time periods.

While I had a number of friends in Columbus, old and new, there were times when I felt cut off, so to speak, from the life I'd left behind. So I would be not only excited, but grateful, whenever friends came in from out of town, because it would be a tangible reminder of that old life. Granted, I don't see Sean and Sophia that often to begin with, but I do remember thinking how seeing them under these circumstances - living a new life in a different city - felt different. When Bibi and Eric passed my way while touring the Midwest, it was the same, only more so, since I'm much closer to them.

After the movie, we, along with mutual friend Mike and his girlfriend, hung out at a cafe for the rest of the night.
Posted by Rich at 9:38 AM