Highlights from the Governors Awards 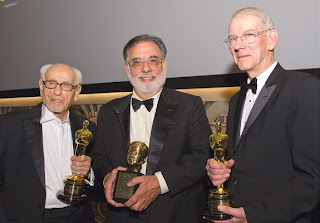 ...one of the charms of the Governors Awards is that it’s not televised, and that nobody’s trying to rush the winners offstage. If Francis Coppola wants to ramble and admit that he hadn’t prepared a speech to accept the Irving G. Thalberg Memorial Award, that’s okay.

If the Academy opts to use count ‘em, seven different members of the Board of Governors to speak glowingly of the absent Godard before running Jon Bloom's sly film package saluting the director, nobody’s going to tune out.

If Tony Bennett decides before the show that he wants to not only perform “Watch What Happens” for his friend Wallach, but also to add a second song, “Maybe This Time” from “Cabaret” – well, who’s going to turn down the chance to hear another Tony Bennett song?

Also:
- Biutiful director Alejandro Gonzalez Inarritu, along with producer Guillermo del Toro and members of the crew, speak very frankly about their film and the difficulty of making and distributing quality films. (Thompson on Hollywood)
- The Best Picture Oscar race may come down to two films: The Social Network or The King's Speech. (Scott Feinberg)
- A home video distributor that redacts films of "questionable" moral content is being taken to court by Hollywood. (THR)
- Separate interviews with Get Low stars Robert Duvall and Sissy Spacek. (The Odds, Awards Daily)
- Who knew Marilyn Monroe could cook? (NYTimes)
- In appreciation of movie stunts and the people who make them. (Salon)
- Did you know the shortest Oscar-nominated performance is only two and a half minutes long? (StinkyLulu via In Contention)