Director Mike Leigh and his actresses 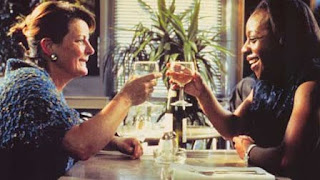 ...it is easier to feel one might be a Mike Leigh woman than to generalise about any of them. What Leigh has, in common with Pinter, is a genius for dramatising ordinary people. Unlike Pinter, he is never sinister nor stylised. Pinter enjoys enigma, Leigh is about transparency. You can see right through his characters, you know more about them than they do about themselves. And his films have a good heart. Alongside misery, there is always human kindness. And – tiny but telling detail – his women are forever putting the kettle on (as in life) when the troubles of the day are over or, more often, just as they are getting under way.

Also:
- The Dilemma director Ron Howard says the gay joke is important to the character. (The Big Picture)
- On the ever-evolving state of film criticism... and the democratic response. (Awards Daily, In Contention)
- Fine artist-turned-filmmaker Julian Schnabel on his latest film, Miral. (Guardian)
- Check out these old newspaper ads for horror movies. (Retrospace)
- A review of a new book about the Marx Brothers' Duck Soup: is it the best war movie ever? (Out of the Past)
- This U.S. map assigns a definitive movie to each state. (Huffington Post)
Posted by Rich at 12:07 AM