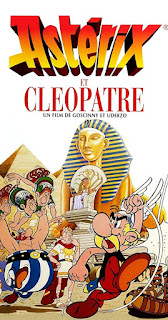 I was halfway through art school when I decided I’d rather study cartooning than illustration. Many of my friends wanted to break into professional comics, which to them meant Marvel and DC Comics. A few already did while they were still in school, so I thought I had to draw superheroes too, and to draw like them: men and women with perfect physiques in a semi-realistic style. I did my best, but it was a struggle. One of my teachers recommended I look to a different model of successful comics: a series out of France called Asterix.

European comics, or bande dessinée, as the French call them, have a rich and diverse history, one which is not dominated by superheroes. For years, the newsstand magazine Heavy Metal exposed Americans to a more grownup and sophisticated alternate world of comics storytelling devoid of the childish power fantasies of Marvel and DC, but the tradition goes back much further, with one of the biggest and most important titles of the medium being the series Tintin. And it wasn’t just original creations: for decades, Donald Duck was a megastar in Europe in comics form.

European comics characters crossed over into movies and TV when Kevin Feige was still in diapers. Some examples Americans knew about for years include the animated film version of Heavy Metal; the Jane Fonda flick Barbarella, and of course, The Smurfs on Saturday mornings! 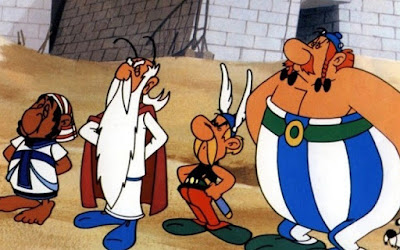 Rene Goscinny was a comics writer and editor, born in Paris and raised in Buenos Aires. In 1951 he met artist Albert Uderzo, the son of Italian immigrants born in Fismes, France. They made comics serialized in the Tintin magazine, and in 1959 joined the new publication Pilote, where the character Asterix was born in the first issue.

Asterix is a Gaul, in the time of the Roman Empire, a short but mighty warrior who gets a Popeye-like power boost from a magic potion. His sidekick is the large and dimwitted Obelix, who has a pet dog named Dogmatix. Caesar, naturally, is the main bad guy. It’s been a long time since I read it, so I don’t recall how the writing is, but the art is lively and well-suited for animation. The contrast of little Asterix and huge Obelix helps make them memorable, and like Tintin, the cartoony figures are set against realistic backgrounds depicting locales from around the world—the ancient world, in this case. 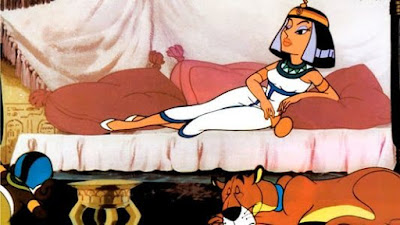 The first Asterix collection (in Europe they call trade paperbacks or graphic novels “albums”), Asterix the Gaul, came out in 1961 and collections came out on a yearly basis. There are 38 so far. When Goscinny died in 1977, Uderzo took over the writing and continued without him until he sold his share to Hachette in 2008. They rebooted the series with new guys five years later. Uderzo died in March of this year.

My comics work eventually made a turn towards a more cartoony style, though I never got as good as  Uderzo. In the 90s, room was made for more... interpretive styles in superhero comics, though that probably had more to do with the success of TV shows like Batman: The Animated Series than anything from Europe—but I believe I benefited regardless. 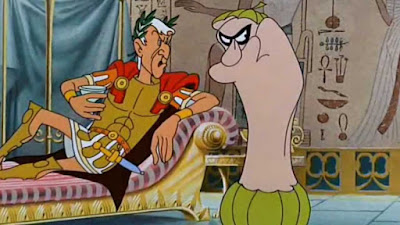 In 1967, the first Asterix animated film came out, Asterix the Gaul, produced by Dargaud, Asterix’ publisher, but without Goscinny and Uderzo’s involvement, so instead I’ve chosen to discuss the second film, made the next year, Asterix and Cleopatra, which the duo co-directed. It’s an adaptation of their album of the same name, originally serialized in Pilote. The film was also produced by Dargaud.

In it, Asterix and Obelix help their Egyptian architect buddy build a new temple for Cleopatra while thwarting the efforts of a rival architect, and Caesar, of course, to block its construction. It’s alright. The songs don’t advance the plot much, and don’t compare with anything Disney ever made, but they’re mildly entertaining. And the animation literally brings the comics to life, which probably wasn’t hard, since Uderzo’s art looks animation-ready. I can’t help but notice, though, that Cleo looks noticeably lighter in the film than in the comics. I could complain, but hey, it’s not like Cleo hadn’t been depicted as a white woman in the movies before. The movie is still watchable.

In 2002, there was a live-action adaptation, actually the second live-action version of Asterix, with Gerard Depardieu as Obelix and Monica Bellucci as Cleopatra!
Posted by Rich at 1:00 PM