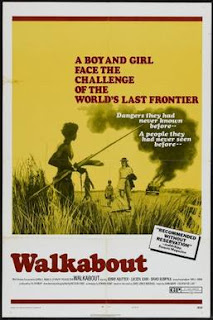 Walkabout is actually an Australian co-production with the UK, helmed by an English director, Nicolas Roeg, but it’s plenty Australian enough. Next year will mark its fiftieth anniversary, and time has been good to it. As recently as 2016, Jenny Agutter and Luc Roeg (the director’s son) spoke to The Guardian about the making of the film.

Here’s a brief explanation of the Australian outback and here’s a short video of it from 2014. I find it both beautiful and terrifying in its starkness: it’s pure nature untamed, as far removed from civilization as you can get on Planet Earth and it dares you to survive there if you can.

Director Roeg gets it all in his film: the bleak and harsh landscape mixed with the breathtaking beauty of its plant and animal life. I found myself thinking of the experimental film Koyaanisqatsi in the sense of the contrast between the modern, “civilized” world and the primal world of nature. Indeed, Roeg encourages that contrast in the editing; in one sequence, the hunting and slaughtering of an animal is juxtaposed with a butcher in a meat market. 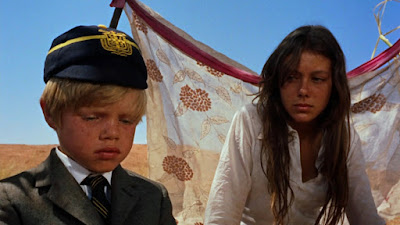 As a story, I didn’t completely get why Agutter and young Luc get there in the first place: in the beginning we see them on what looks like a picnic in the outback with their dad, and then all of a sudden it’s like Dad goes bananas and takes out a gun and shoots at them? And then he sets his car on fire and shoots himself? Director Roeg offers nothing in the way of an explanation, and ultimately it doesn’t matter—he had to get the kids in the outback and lost somehow—but the way it unfolds is bizarre.

Agutter and Luc’s nameless protagonists adjust to their situation better than you’d think: no freaking out at the reality of their situation—one minute being on a picnic with Dad, the next struggling to survive in the midst of a wasteland after seeing Dad commit suicide. You’d almost think they were on holiday at times. 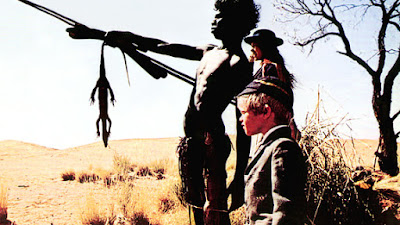 You know what became of Agutter after this—Logan’s Run, American Werewolf in London, among other things (apparently she was also in Captain America: The Winter Soldier and the first Avengers movie too); and Luc Roeg went on to become a producer (he worked on We Need to Talk About Kevin)—but I wanna talk about David Gulpilil, who portrayed the Aboriginal dude who encounters them during their sojourn. To me it didn’t even seem like he was acting; I thought he was real.

Walkabout was Gulpilil’s first film; he was seventeen at the time. Roeg found him when he went location scouting in the Aboriginal community of Maningrida, in Arnhem Land, where Gulpilil went to school. Walkabout made him a sensation. He’s been in some big movies since: Crocodile Dundee (of course), The Right Stuff, Peter Weir’s The Last Wave, the Hugh Jackman-Nicole Kidman romance Australia, plus some TV work. He was born in the Northern Territory district as a Yolngu and is also known as a ceremonial dancer, singer and tracker, in addition to being a children’s book author and a mentor to other Australian indigenous peoples.