The One Armed Swordsmen 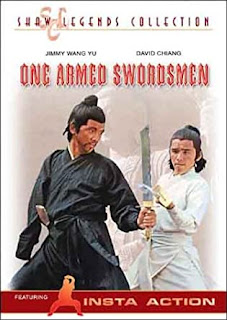 You would think a one-armed swordsman would be a rare thing indeed. You would think well, center of gravity is off, balance is tricky, upper body strength would be compromised—it might be possible to go through life that way if you work hard enough at it, but you wouldn’t see very many guys doing it, and certainly not in the same place. You would think that.

But you don’t live in a kung fu movie.

What would a cinematic trip around the world be without some chop-socky fighting action? I remember watching martial arts films on the weekends on TV (I believe Channel 5 here in New York would show them) and they were like superhero cartoons in a way: the over-the-top violence, the exaggerated characters, the outrageous abilities they possessed. And all of it badly dubbed, of course.

No doubt Asian countries see these films differently than we Westerners. Martial arts films speak to their history, their culture, their mythology, and though they may seem alike after so many of these films have been cranked out, one could say the same about American Westerns, with whom they have quite a bit in common. And when it comes to martial arts films, one name stands head and shoulders above the pack: the Shaw Brothers. 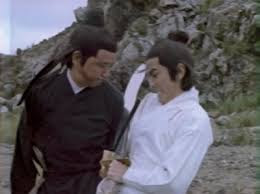 Shaw Brothers Studio was based in Hong Kong. Their roots began in 1925, before the modern company was founded in 1958 by Runme and Run Run Shaw. Here’s a detailed history of the studio. Suffice it to say they were prolific in their production.

In the 70s, when rival studio Golden Harvest, producers of Enter the Dragon, among other films, began to challenge the market, Shaw started to co-produce Western films. Remember the Sean Connery sci-fi flick Meteor? That was a Shaw co-production, for example—but you might remember another Western SF flick with the Shaw name on it: Blade Runner. No, they did not produce the Kill Bill films; Tarantino just included their logo in the credits because he loves them. Here’s Variety’s obit on Run Run Shaw, who died in 2014 at the remarkable age of 106!

So I thought I was watching a movie called The One Armed Swordsman, singular—the one from 1967, a Shaw Brothers Studio production which is supposed to be a landmark in kung fu cinema. What I saw instead was a later film from 1976 called The One Armed Swordsmen, plural, not a Shaw Brothers Studio production, which I did not realize until after the fact. You wouldn’t believe how many similarly-titled movies there are with one-armed swordsmen (and swordswomen too). People think Hollywood is unoriginal when it comes to sequels and spin-offs and team-ups? They’ve got nothing on Hong Kong, believe me! 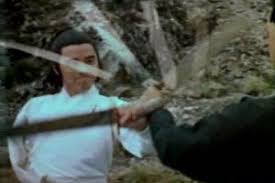 Still, I have nothing against what I did see, and it’s certainly representative of HK cinema, so I’ve decided to write about it anyway. The movie stars Jimmy Wang Yu and David Chiang as the titular single-limbed warriors, running around looking for yet another one-armed swordsman who killed somebody important.

Honestly, plot is not really that big a deal when it comes to these flicks; you watch them because you want chop-socky fighting action, and this one has it. Yu was the star of the ‘67 original; the first HK film to make a million dollars. Chiang starred in the spin-off film The New One-Armed Swordsman (see what I mean about all those spin-offs?). Both actors had long and prosperous careers making kung fu movies. And guess what, kids: they both directed this flick!

Yu directed 12 films, all during the 70s, including one called The One-Armed Boxer (I swear I’m not making this up). Chiang directed 15 films, from the 70s into the 90s, some under the name John Chiang.

Obviously, they both have all their arms in real life; I assume their right arms were bound to their sides and hidden under their robes and capes. Couldn’t have been very comfortable moving around like that. These days they could just digitally remove their limbs, but they would still need to move as if they had only one arm. Before the quarantine, I remember seeing a one-armed dude regularly at my gym. He had a personal trainer who helped him do exercises, and I even saw him attempt one of the weightlifting machines once.

Swordsmen has many of the standard kung fu cliches: wise old teacher figure; one-against-many fights where the many never, ever try to bum-rush the one, fighting them two or three at a time instead (sorry, that always irks me); zoom-in close-ups in a dramatic moment; one-on-one fights for no particular reason; crazy stunts during fight scenes (the kind Jackie Chan made popular), etc. This doesn’t reinvent the wheel; I suspect it was an excuse to bring Yu and Chiang together and nothing more. That’s okay.
Posted by Rich at 11:15 AM