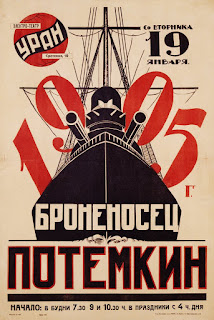 In Soviet Russia, movies watch you!

Okay, so much for the cheap joke...

Here’s everything you need to know about the Russian Revolution of 1905. Here’s how the town of Odessa factored into the revolution as a result of the pogroms against its Jewish population. And here’s the reality behind the mutiny on the Russian navy’s flagship that inspired the breathtaking film Battleship Potemkin. Pay attention because there’ll be a quiz later.

And as an aside: much, much better writers than Yours Truly have discussed the pros and cons of communism. I’m not interested in going down that path. Leave discussion of Lenin and Marx (not that one) on the table. My only concern is the movie. 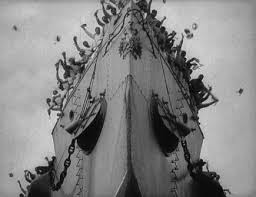 Wow, what can I say? It’s unlike anything ever made in the entire silent era, and while it may be dated as a piece of political propaganda, as a work of world cinema you better believe it still holds up. It is ballsy: absolutely unafraid to appeal to emotion while visually stunning at the same time. How does one storyboard a movie like this, and then how does one conceive the vision necessary to edit it in such a frenetic manner, in a time when the visual language of film was still being shaped?

Let’s start with the scene everybody still talks about, almost a century later: the Odessa Steps scene. Now the place is called the Potemkin Stairs. There are 192 of them, it was completed in 1841, and it stretches 28 meters in height. Here’s a nice shot of it today, and don’t worry, if you can’t climb all those stairs, there’s a funicular off to the side. 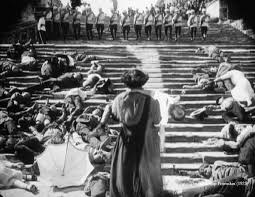 The scene has been analyzed to death and been paid tribute to in lots of movies, one notable example being The Untouchables. Here’s an analysis of De Palma’s homage. Now that I’ve seen the original, I gotta say, De Palma’s version is great but I think the use of slow motion dulls the impact somewhat in comparison.

I understand why he used it—the crowd-pleasing moment when Andy Garcia flips Kevin Costner the gun wouldn’t be as effective otherwise—but his version is more about suspense as opposed to cathartic emotion; can Eliot Ness take out the gangsters and save the baby at the same time? You know he will, but it’s the how of it that’s what makes that moment thrilling. That’s why the action is slowed down. 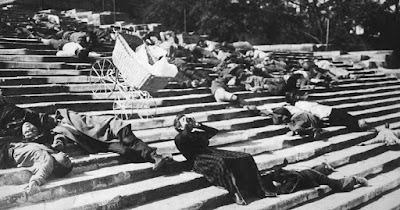 The original is more about horror, the atrocity of the Cossacks gunning down innocent people; the loss of hope instead of salvation. You feel that when the mother carries the child’s body up toward the soldiers; they won’t stop for her, they feel no pity for her, and what should be a heroic moment turns into tragedy.

Showing it in slo-mo (if it had been around in 1925) wouldn’t have been the same; the soldiers are relentless, so the action is too. The cross-cutting with the shocked looks on the women’s faces underlines that relentlessness: quick, sudden, no time to think about it. One minute they’re alive; the next they’re dead. Like I said, ballsy. 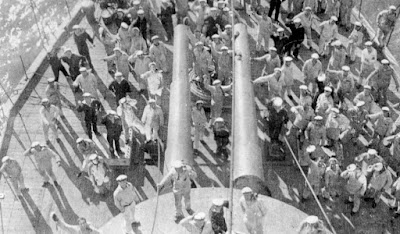 And not only was this just the second feature-length film by the director, the guy was only 27 years old when he made it. Sergei Eisenstein was born in what is now Latvia and was part of the Red Army, supporting the Bolsheviks. In 1920, three years after the second big revolt in Russian history, he was in Moscow working in the field of radical working-class art. By 1923 he had begun writing down his ideas on the emerging Soviet idea of montage in film and became one of its leading proponents.

In a nutshell, the idea was that by cutting seemingly random images and putting them together in a sequence, meaning can emerge. Today you can see this technique in commercials, in music videos, lots of common places, but back then filmmakers like Eisenstein and Lev Kuleshov and Dziga Vertov were interested in putting forth the rhetoric of the revolution to the people. This video goes into more detail (warning: the critic talks fast). 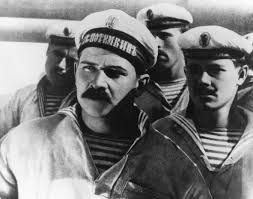 Potemkin isn’t one long montage; the technique is used selectively, at certain critical moments—and in conjunction with the right music, the effect can be overwhelming. Edmund Meisel composed the original score for the film. The version I watched used music from the famous Russian composer Dmitri Shostakovich.

And as if all of this weren’t enough, Potemkin has a history of censorship in various countries, including its own. 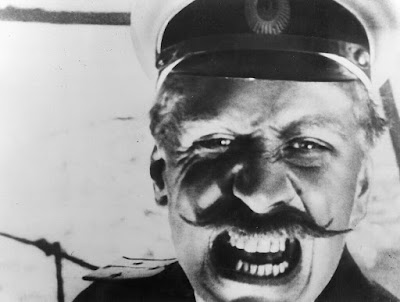 Eisenstein made more films at home, toured Europe for awhile, had a brief sojourn in Hollywood (with Paramount, specifically), met socialist writer Upton Sinclair and teamed up with him for some movies in Mexico, came back to the Soviet Union and made more movies and taught filmmaking. Today he’s regarded as one of the giants of early cinema.

So yeah, if you consider yourself any kind of cinephile, you really gotta watch this movie at some point. Much of the modern visual aesthetic of film owes a debt to Eisenstein and Potemkin.

Here endeth the lesson.
Posted by Rich at 11:30 AM