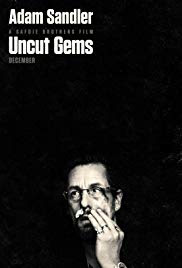 Adam Sandler, like many comedians before him, wants to be taken seriously as an Actor. That’s okay by me; I like seeing actors of all stripes try new things. They should. Sometimes when a comedian switches to drama, though, they never switch back, and that disappoints me, but it’s their career, after all, to go in whatever direction they choose.

I was never a huge Sandler fan. I think the only comedy of his I can honestly say I liked was The Wedding Singer, which had Drew Barrymore in it too. His comedy music is pretty good, though—and his Hanukkah song kicks ass.

Sandler has ventured into dramatic films before. I never saw Spanglish, but I did see Punch-Drunk Love, a romance with Emily Watson (no relation), directed by Paul Thomas Anderson. I was lukewarm to it at the time, but now I’m thinking perhaps I should revisit it. Still, I doubt any of his past work prepared us for Uncut Gems, his latest film, which has people mentioning his name and Oscar in the same breath—and who could’ve predicted that? 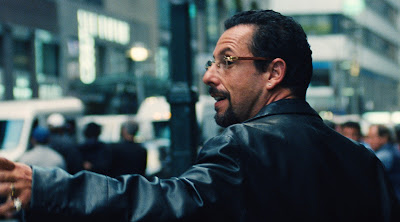 Full disclosure: I saw this film on January 2, still recovering from New Year’s Eve. Not that I had a hangover—the drinks at the bar Virginia and me and our friends were in were way too expensive for more than one beer—but I didn’t get home until sometime after three. At the theater my sleep cycle was still off, plus the beginnings of a cold stirred. Bottom line: it’s possible I was in the wrong frame of mind to watch any movie...

...much less one like this. Sandler plays a New York jeweler addicted to gambling, particularly on NBA basketball. There’s a subplot about an Ethiopian rock with all sorts of precious jewels embedded in it that attracts the attention of a Boston Celtics star, there’s Sandler having an affair with his co-worker, there’s some leg-breakers Sandler owes money to—and the dialogue comes and goes at a rapid clip, with Altmanesque overlapping, and Sandler being very manic and high-strung, schmoozing with everyone he talks to in a sleazy and profane fashion.

On Twitter, I compared Sandler’s performance to Dustin Hoffman, which I still stand by. He’s got a little Pacino mixed in as well. This is a movie which could have been made in the 70s: its milieu, its character-driven plot, its antihero lead all scream “New Hollywood” era. In fact, Scorsese is an executive producer on Gems. That said, the whole thing gave me a headache. Sandler, good as he was, felt shrill and one-note after awhile, though I’m not sure if that was because of where my head was at or not—and I’m in no great hurry to see the movie again.

Gems was directed and co-written (with Ronald Bronstein) by brothers Josh & Benny Safdie, indie filmmakers who had done some stuff before this. Sandler’s character Howard is a Shylock, but the Safdies immerse the film in Jewish culture; it’s a big aspect of its identity. Mostly, though, it’s New York hustle: Howard haggling with NBA star Kevin Garnett (as himself) over the Ethiopian rock, Howard haggling with the goons over money, Howard haggling with his wife and his lover, and all at a go-go pace.

Like I said, I may not have been in the right mood to see such a movie, but at the least I can appreciate its craft. The score was good, so was the cinematography, and this was Sandler in a different context, if nothing else. How much you’ll like this depends on how you feel about Sandler. I never hated him, but a little always went a long way with him. In Gems, he is the movie, he dominates it, and you may not be willing to spend two hours with him in a non-comedic manner. It’s enough to give you tsuris, know what I mean, bubbeleh?
Posted by Rich at 7:00 AM