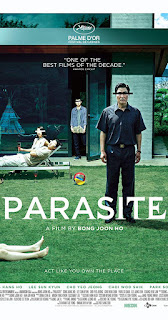 When I began WSW over nine years ago (!), I was more up on new releases than I am now. You could say I believed it was part of my responsibility as a film blogger. Hanging around classic film bloggers over time made me think otherwise, and now I no longer pay as close attention to things like who’s getting cast in what movie, what project a given director is eyeing, or what the weekend box office take for the latest franchise movie was.

So when I saw that this foreign movie I had only recently heard of called Parasite was nominated for the Best Picture Oscar, it took me completely by surprise—but if I had been following the Oscar race year-round, like I used to, chances are I could’ve seen it coming. This was the Palme d’Or winner at Cannes. It has a score of 99 at Rotten Tomatoes. It won the Golden Globe for Best Foreign Language Film and has been nominated for a ton of other awards around the world.

This film is a huge hit. I had thought the Academy was being enlightened and progressive by nominating it for its top honor, and they kind of are, but I think in this case, it might have been simply too big for them to ignore. 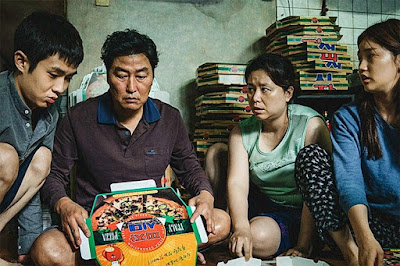 Still getting used to the name Bong Joon Ho, the director and co-writer (I keep saying “Boon Jong” instead). He’s been around awhile—months ago I saw his SF movie Snowpiercer on Netflix. I thought about doing a post on it, but never did. No real reason.

I’ve watched quite a few movies on Netflix I haven’t blogged about. That might be another way WSW has evolved: used to be I felt I needed constant content to stay visible, so I would blog four to six times a week, on everything I saw, but a pace like that was unsustainable for me. Some bloggers can do it. I can’t.

Snowpiercer had Western stars like Chris Evans and Tilda Swinton in it (a sign of how well known he is already), but Parasite was made in his native South Korea, with Korean actors. The premise is original and delightfully subversive: a dirt-poor, unemployed family figures out a way to infiltrate the household of a rich family by posing as strangers and secretly getting the established staff out, one by one, which leads to different problems. There are plans for an HBO miniseries that will expand the original story further. 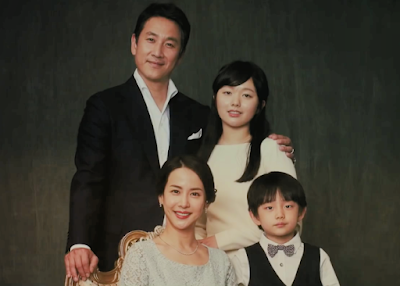 Once I figured out the basic premise, I really got into the story. It’s funny in places, and the climax is a gory bloodbath, so it’s hard to classify this movie. I’ve seen it described both as a black comedy and a thriller; I lean more toward the latter but really, it’s its own thing. The class struggle is obviously a major theme, but it’s not like it preaches. Every character is unsympathetic to one degree or another, and the friction between the two families produces the movie’s memorable moments. I’m reminded of the work of Luis Bunuel, or to a lesser extent, Mike Leigh, crossed with Tarantino. I’d have to see more of Bong’s work to know whether or not this is typical of him.

Not much more to say. Good acting, good set design—the contrast between the families’ homes is sharp—great screenplay, obviously, good score. This is everything you would want in a movie.
Posted by Rich at 7:00 AM