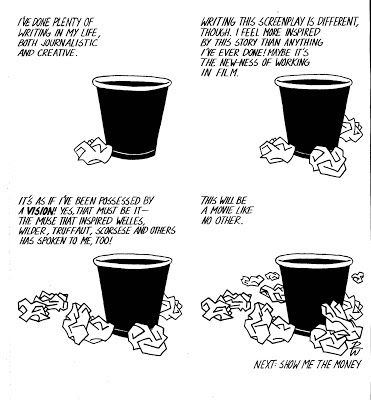 This is the first of what I hope will be a number of chapters in which I play with the format. For this one in particular, I knew from the get-go that this was the approach I wanted to take. Obviously it's easier to draw overall, but what's much more important was the implication aspect, the suggestion of an idea. I had recently talked here at length about Billy Wilder and Ernst Lubitsch. I forget which one of them said it, but I think the idea applies here: if you give the audience two and two, let them add it up to four on their own. I think that's great advice for cartooning as well as filmmaking.

Since this strip is gonna have 48 chapters, it's vitally important to me to allow for opportunities to shake the format up every once in awhile. I don't wanna take the same approach for every chapter, and I would hope that by doing so, it will enrich your reading experience as well.

I can tell you now that while we will see glimpses of CM's movie here and there, I haven't given a great deal of thought as to what it's about. From a creative point of view, it's more important to me as the author of this strip to look at the movie-making process that CM goes through; the highs and lows, the challenges he'll face in making this. The movie itself is less important.
Posted by Rich at 9:00 AM