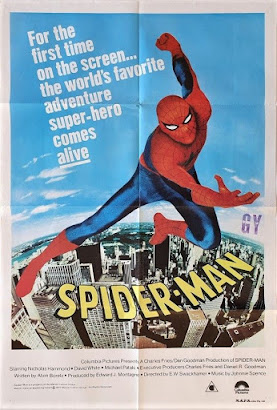 Ever since the Spider-Man film rights were acquired by Marvel Studios, their signature character has seen some changes. He got himself a suit of armor designed by Tony Stark. He became an Avenger and travelled with them to outer space. He’s met versions of Spider-Man from parallel universes, including a black kid, a girl, even a cartoon pig!

In the comics, back in the 70s, he was still recognizable as Peter Parker, college kid and part-time freelance photographer—living with his Aunt May, fighting the Green Goblin and Doctor Octopus, getting no respect from J. Jonah Jameson and the Daily Bugle. He began the decade mourning the death of girlfriend Gwen Stacy at the hands of the Goblin, grew four arms for a brief time (don’t ask!), became more of a stud with the chicks than in his high school years, first proposed to Mary Jane Watson (no relation), only to get shot down, and ended the decade in a relationship with a burglar called the Black Cat, who only loved him as Spider-Man and could’ve cared less who was under the mask.

At the same time, Marvel Comics’ inroads into Hollywood grew deeper. You may remember the early animated series from the 60s, including the Spidey series with the awesome theme song. Marvel continued to pursue this avenue, but they also looked into developing live-action material for television. The success of the live-action Batman and Wonder Woman series from the Distinguished Competition was no doubt an impetus for them.

If you’re from my generation, you may remember the Spidey skits on The Electric Company, for example, but that was kid stuff. Marvel wanted something that could play in prime time. 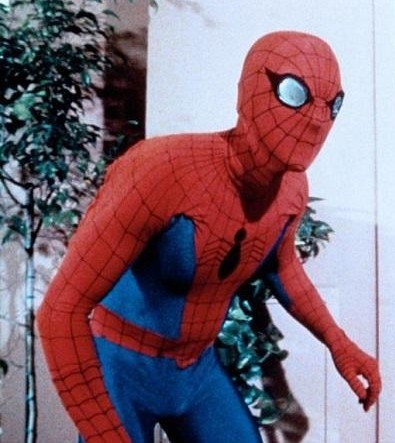 Stan Lee sold the Spider-Man rights to CBS, who would make a 90-minute pilot in anticipation of a weekly TV show. Adapted by Alvin Boretz and directed by EW Swackhamer (now there’s one of the all-time great names), it aired in September 1977.
Nicholas Hammond was in The Sound of Music, which I have never seen. He was also in Once Upon a Time in Hollywood, which I have seen. Regardless, he’s the one who puts on the webbed tights here, and since we never saw Spidey without the mask on The Electric Company, that makes Hammond the first to play Peter Parker. 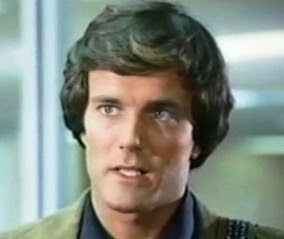 His Peter put me in mind of Christopher Reeve’s Clark Kent: open, genuine, earnest and likable in an endearingly goofy kind of way—in other words, the kind of protagonist you never see on dramatic television anymore! Like Clark, Peter works at a newspaper and gets shat upon by his boss, who’s always looking for the next great headline (though I’d argue JJJ is harder to work for than Perry White).
Spider-Man almost never speaks. One of, if not the most loquacious superheroes in comics and he barely talks! It’s well established that Peter is as garrulous as he is behind the mask because it allows him to express that side of himself, in a way he can’t do in real life, so for the first live-action version of the character intended to be more than one-dimensional, this was a great disappointment. 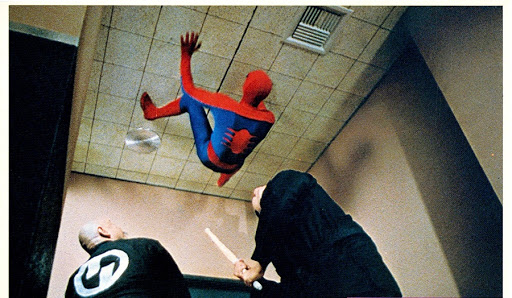 There’s a fight scene involving a trio of staff-wielding bodyguards looking like they just came off the set of Enter the Dragon, and it’s ripe for mockery due to its incongruity, but when Spidey meets them they just stare at each other before fighting. There’s no reason I could detect for him not to say anything, unless he really believed they would recognize his voice, but the whole secret identity thing isn’t given more than a brief, off- the-cuff justification by Peter in one scene. A Spidey without wisecracks isn’t really Spidey.
Don’t expect any of the usual members of the rogues gallery either. The villain is an L. Ron Hubbard-type guru/cult leader using a technological form of mind control in a city-wide extortion scheme. Whatever, man. 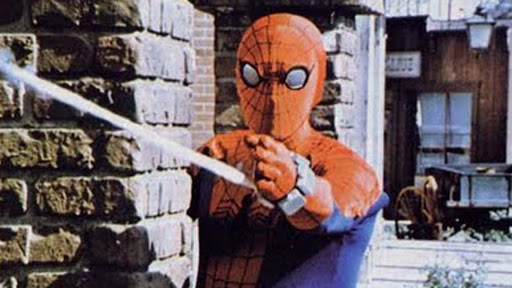 This version of the ol’ Webhead isn’t terrible—David White makes a pretty good JJJ, even if the look isn’t exact, and the wall-crawling effects are better than they have a right to be for 1977, but I’d rather watch Spider-Man and his Amazing Friends than this.
The film did lead to a series, The Amazing Spider-Man, which lasted two seasons—five and seven episodes—when CBS bothered to air it, which was not on anything resembling a regular schedule. Even Smilin’ Stan himself went on record as saying it sucked. 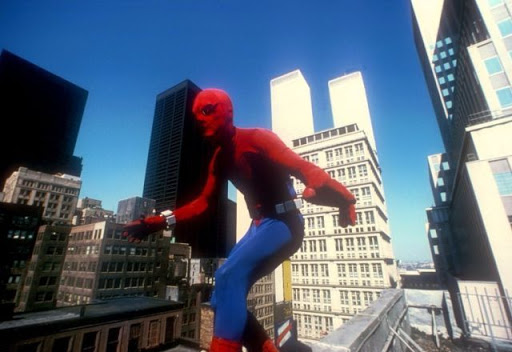 This was also the year The Incredible Hulk debuted on TV. Bill Bixby and Lou Ferrigno portrayed both sides of the monstrous creature, and while that too, veered far from canon, the show was compelling, in its own way, and I was a fan. A year later a Spider-Man film was made in Japan, and it looked exactly the way you would expect.
Fast forward to today and the near future promises TV shows featuring characters as esoteric and highly unlikely as the Vision and the Scarlet Witch, the Winter Soldier and the Falcon. And you may ask yourself, well... how did we get here?
———————
Related:
Spider-Man (2002)
Posted by Rich at 7:00 AM