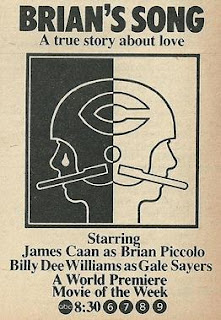 These are the facts in the brief career of pro football star Brian Piccolo: he was college football’s leading rusher in 1964 at Wake Forest, and was named the Atlantic Coast Conference Player of the Year, finishing tenth in the Heisman Trophy balloting.

He was signed by the Chicago Bears as a free agent, after both the NFL and the AFL passed on drafting him. In 1968, the year in which teammate and former Rookie of the Year Gale Sayers injured his knee, Piccolo ran for 450 yards, had 291 yards receiving, and two touchdowns.

In 1969 Piccolo was diagnosed with embryonal cell carcinoma, and underwent surgery twice. He died June 16, 1970 at the age of 26, leaving behind a wife and three daughters.

Those are the facts... but the facts only tell you so much. 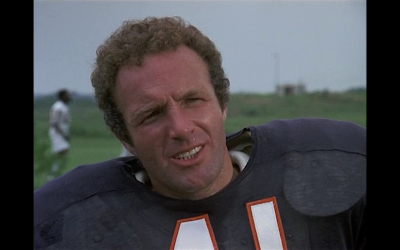 Brian’s Song is a film I’d always been curious about but just never got around to watching—not that I thought it would be all that different from any other disease-of-the-week TV movie. It’s just that as a sports fan, this was always considered one of the essential sports movies, one where it was okay for a man to cry.

When I think of the Chicago Bears, I think of the “Super Bowl Shuffle” season (of course I remember that silly record they made. Don’t you?) and... not much else. It’s been a long time since I was into football so they could’ve won three more Super Bowls since then for all I know. But this movie is not about that! 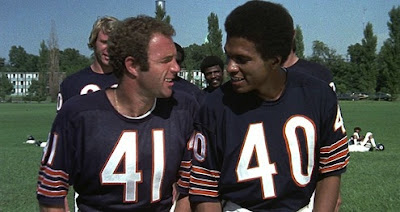 2020 happens to be the fiftieth anniversary of Piccolo’s death. The Bears’ website has a complete profile on him and you can find lots of written and video tributes to him around the net. In 1970, Sayers wrote, with Al Silverman, a memoir: I Am Third, which detailed his close friendship with Piccolo, and it was fast tracked towards a TV movie adaptation, written by William Blinn and directed by Buzz Kulik. It aired in November 1971 and was such a success, it got a theatrical release as well.

James Caan, a year before The Godfather, doesn’t really look like Piccolo, but by this point, he’s linked with him in many people’s minds. Billy Dee Williams, one year before Lady Sings the Blues, resembles his counterpart, Sayers, more, though he just doesn’t look right without his mustache. 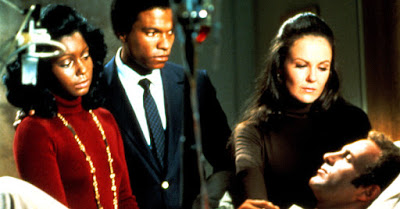 Piccolo and Sayers’ friendship was particularly notable given that it existed during the 60s, a time of tremendous racial strife around the country. On the road they roomed together, an unprecedented act in the NFL. They competed for the same job, and while Sayers was the one who would have a Hall of Fame career, who knows how far Piccolo would have gone, with the Bears or another team?

The disease-of-the-week TV movie may have become a cliche, but it originated somewhere. Maybe it didn’t start with Brian; I dunno, but its success makes me think it did: it won four Emmys, including Outstanding Single Program, Drama or Comedy and Supporting Actor, Drama for Jack Warden’s portrayal of coach George “Papa Bear” Halas.

I wish I could’ve seen this when it first came out. I have no doubt the strong emotions it stirred would’ve gotten to me more than it did. As it is, I think it’s a tasteful and decent male weepy movie. 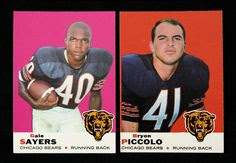