‘Tenet’ to go int’l before US release: start of a trend? 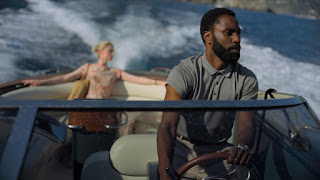 ...Warner Bros. said last week that “Tenet” would not have a traditional global day-and-date release — a surprising (though not unprecedented) break from tradition since North America is the world’s biggest film market and remains pivotal for major movies to turn a profit. But the studio hopes to innovate and recalibrate given the fact that foreign markets are already starting to reopen safely and desperately need new Hollywood movies to entice crowds.

If theaters in other countries are ready to go and we’re not, then they probably should get to see Tenet first. It’s unfortunate that piracy and spoiler-filled online discussions are the price Americans will have to pay until we can see the movie safely, but maybe it’s what we deserve for not wearing masks.

I’m seeing a lot of talk about the possibility of Hollywood productions moving abroad for the short term. That’s a trend that had started before The Virus: James Cameron, for instance, has been making the Avatar sequels in New Zealand, and after a brief shutdown earlier this year, he’s back at it. I could see some studios relocating to someplace like Vancouver if it was a matter of keeping their doors open and getting new product to those international markets. Meanwhile, streaming and VOD options remain a safe and viable option.

Regarding Tenet: I remain uncertain whether or not I’ll go see it, assuming theaters will be open by September (not a sure thing at all). If this had been a normal year, there’s no question I would’ve been there opening weekend, but the incredible amount of buildup around this movie once again has me questioning whether or not any of it is warranted. I’m sure it is and I’m just being contrary.

I’m more concerned about the possibility that I may have to let go of my attachment to the theatrical experience of seeing a movie sooner rather than later—but I’ll talk more about that later this month. One thing’s for sure: movies and TV won’t look the same once this is over. (Speaking of Tenet, did you know star John David Washington used to play in the NFL?)


I spent an afternoon with Vija in the city last month, so I took the subway for the first time since March. The sight of the sparsely-populated cars was astonishing; I could sit in both directions, including during “rush hour” on the ride home—something I should not normally be able to do so easily. Some rush! Truth is, the subway is losing money; it no longer operates 24/7 and may face some severe service cuts. I’ve been signing petitions and emailing politicians in an effort to prevent that from happening. We’re hoping the feds will kick in with some money. Meanwhile, biking has gone up in a huge way, so there’s that.

This was also my first trip to Manhattan in months. It was a sunny and hot day, and lots of people were out and about. Sections of certain streets, such as Broadway, have opened to pedestrians in order to socially distance better, and some restaurants expanded their seating so people can eat outdoors. (I’m seeing that in Queens too.) I know I saw more bikes and fewer cars. It’s tragic that it took a pandemic for changes such as these to happen, but from the little I saw of Manhattan, it feels like a more livable place to be.

Will these changes remain once The Virus is under control? They’ve been met with resistance by drivers and ignorant businesses, and while the mayor has and is going forward with these plans, he’s been proceeding at a slow pace. Everything’s temporary, on pilot programs, in a testing stage, etc. Getting a long-term commitment from him is like pulling teeth—but then, he’ll be out of office by the end of next year.

Vija and I had a small lunch in the park and it was great. I had missed her. We sat at a wide-ish table, not quite six feet across, but wide enough. I felt leery about taking my mask off outside, even to eat, but I put it back on when it was time to leave, of course. For awhile I could almost believe it was a normal day. Almost.

TV movies from the 70s this month! Beginning Tuesday.
Posted by Rich at 8:01 AM