The Jeff Goldblum Blogathon is an event devoted to the life and career of the actor, hosted by RealWeegieMidget Reviews and Emma K. Wall Explains It All. For a list of participating bloggers, visit the links at the host sites.

Disco! I’ve talked about it here before, and while I was way too young to have gotten involved in any disco-versus-rock flame wars civilized debates, if you had asked me in, oh, 1980, which side I was on, I would’ve put on my-my-my-my-my boogie shoes and did The Hustle to the music of Chic, or perhaps the Brothers Gibb—even if disco was dying by that point.

My sister would’ve been the reason why. Disco and classic soul is close to Lynne’s heart, always has been, and she and her husband include plenty of it in their cover band. She had a shoebox full of 45s and I believe she even had some 8-tracks, in addition to her many LPs, and whenever she wasn’t around I’d idly go through them and play a few. I was a Top 40 nerd all through grade and junior high school before I discovered classic rock in high school, so my mixtapes had not only disco, but freestyle and even some new wave.

And dancing? I must have spent the entire sixth grade trying to moonwalk. Not easy in Reeboks. I think I mentioned the bar mitzvah I went to sometime in the mid-80s where I danced up a storm with my friend Howard’s sister Susan. I’m pretty sure there was some disco on the turntable that day, though I couldn’t tell you which moves I busted.

I also recall my junior high prom, but that was in 1986 and by then, though we had plenty of Madonna and Whitney Houston and the Pointer Sisters to groove to, we didn’t call it disco. I doubt anyone did. Freestyle was lumped in with general pop music and I never made a distinction. 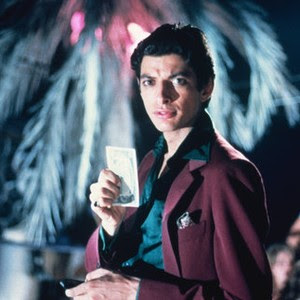 My generation was too young for discotheques, but we had the next best thing: roller rinks! I miss them: the flashy colored lights, the smell of popcorn and hot dogs from the concession stands, the girls in their acid-washed jeans and teased hair, the arcade games (always a huge draw for me), and of course, the music as we skated round and round the polished wooden floor. I couldn’t dance on skates and I would’ve been too chicken to try, but roller rinks were our dance halls.

A goofy movie like Thank God It’s Friday may not stir any nostalgic feelings, but I can appreciate it for the guilty pleasure it is. No, Donna Summer can’t act, but who cares? It’s Donna Summer in a disco movie! Whereas Saturday Night Fever had a patina of 70s grit stuck to its surface that dulls some of its glitz, this one doesn’t. It’s a shameless cash-in on the disco trend and it doesn’t pretend to be anything else and that’s okay. It’s all worth it for this one scene. 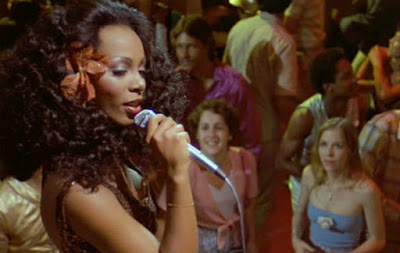 But we’re not here to discuss disco; we’re here for Jeff Goldblum! In TGIF, he plays the owner of the nightclub where the action takes place and he tries to pick up this married chick who’s there with her husband. Goldblum would’ve been 26 when this movie was made, and I have to admit, even though he’s the antagonist, he looks pretty smooth; he looks like he could’ve been a player.

The first film in which I became aware of him was probably The Fly, and yes, it grossed me out every bit as much as it did you—but I kept coming back to it when it repeated on cable. Not long afterward, I might have read that he and Geena Davis were a couple, so this was around the time I began to take more than a passive interest in film—though I couldn’t have told you a thing about David Cronenberg. 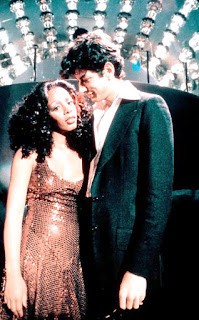 And then came the 90s, when Goldblum became the good luck charm for blockbuster films: Jurassic Park, Independence Day, The Lost World—and these were films that set and broke box office records at the time. He must have considered himself the luckiest guy in Hollywood!

If the 80s action films were about superstar leading men with bulging biceps, these new cinematic behemoths were about spectacle over star power, a trend that continues to this day. Yeah, Will Smith was in ID4, but I remember the marketing for that movie: it was all about those ginormous spaceships and the White House getting blown up real good. He didn’t become Will Smith until that movie. 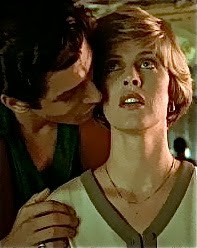 Goldblum, on the other hand, has rarely been a leading man or a marquee attraction, though he has his share of female fans, and this is where I must give a shout-out to a blogger who I miss and hope will return one day: Dorian from Tales of The Easily Distracted. She didn’t have many opportunities to talk about Goldblum, since she and her husband Vinny covered Old Hollywood, but whenever she mentioned him, it was always with a lot of love. She was one of my favorite bloggers; it’s a pity she’s not part of this blogathon because she would’ve loved it.

TGIF is a guilty pleasure movie to which I don’t mind copping. It’s fun, with a terrific soundtrack which includes Diana Ross, The Commodores, Thelma Houston and Cameo, among others—and La Summer, of course. The movie was produced by Motown!

———————
Other films with Jeff Goldblum:
Annie Hall
Invasion of the Body Snatchers
Independence Day
The Grand Budapest Hotel
Guardians of the Galaxy vol. 2
Isle of Dogs