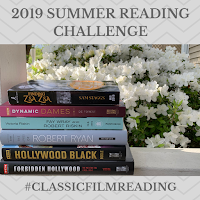 The 2019 Summer Reading Challenge is an event in which the goal is to read and write about a variety of books related to classic film, hosted by Out of the Past. For a complete list of the rules, visit the website.

I met Mary Sheeran at a birthday party Sandi threw last year. I was familiar with her, in a general sense, through Sandi’s Facebook page: I knew she, like Sandi, was a writer as well as a classic movie fan. At the party, we talked for a little bit, but I can’t say I know her that well.

Then Sandi recently told me Mary had a new novel out, one set during the twilight of Hollywood’s studio era, and I figured what the heck, I’ll give it a look. I did more than that; this book is 468 pages! It’s no light summer read. Banished From Memory is not Mary’s first novel, but I did not expect something quite this physically big from a small press book (Aquafire Sulis, since you ask).

Dianna Fletcher is the teenage daughter of a Barrymore-esque acting family in 1960 Hollywood. After a series of Disney movies, Dianna gets a plum role in a more grownup, critically-acclaimed film that gets her kudos as well as unwanted attention. At first, it doesn’t quite get her the respectability or the confidence in her future as an actress she craves, on her terms. Then she meets Bill Royce, an older, up-and-coming Method actor who slowly alters her perceptions about the movie world and her parents, as her fortunes change. Meanwhile, the specter of Communism post-McCarthy still looms over Hollywood in this election year, and over Dianna and Bill. 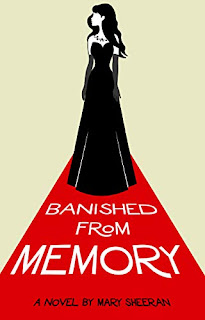 Classic movie fans will geek out at all the familiar names who appear in Memory: Jimmy Stewart, Katharine Hepburn, Frank Sinatra, Lucille Ball, Steve McQueen, James Coburn, Elvis Presley—it might be easier to list who isn’t in it. The Fletcher family is Hollywood royalty and they know just about everybody. Be advised, though, that this is an alternate-universe Hollywood, so the Fletchers take the place of more familiar names in certain films. For example, Dianna’s mom is in The Nun’s Story instead of Audrey Hepburn, and Dianna’s dad is in Ben-Hur instead of Charlton Heston.

Dianna inhabits the 60s, but she was clearly written in the post-Me Too era: Mary makes a point of showing certain male actors and directors making casual (and not so casual) passes at Dianna now that she’s no longer a child, and she resents being appreciated for her looks more than her talent. She’s opinionated, even if she buys into the anti-Communist propaganda at first, and takes her profession seriously, though she still has much to learn. There’s a fantastic scene (though it goes on too long) between her and Bill in which they debate both acting and politics while driving around town. I’d expect Mary to be familiar with the politics of the day—and Memory is well researched—but I was pleasantly surprised at the depth of acting knowledge she uses to inform these two characters with very different philosophies on the subject.

That said, Memory was a difficult read for one huge reason: there’s way too much dialogue. Not just that, but there’s too much dialogue that doesn’t serve the story. I understand it must have been thrilling as a writer to put words in the mouths of so many great movie stars, but there’s too much shop talk, too much banter that slows the story down, not to mention too many minor characters who come and go (including many of those celebrities), which made it hard to keep track of who’s who, what purpose they serve and why I should care about them. This book seriously needed to be streamlined, with a much tighter focus on Dianna and Bill.

The depth of emotion could have been stronger. Some moments deserved a pause for reflection, to emphasize the gravity of the situation. There’s one scene where a director actually slaps Dianna—a sixteen-year-old girl— on set! Pretty shocking, but Mary doesn’t let the moment settle in the reader’s mind for long; she moves on with the scene and we don’t get more than a surface idea of Dianna’s feelings in that moment. Again, less dialogue might have helped.

I suspect Mary wrote this with an agenda—to educate as well as entertain, which is commendable—and while she doesn’t preach, it felt like she was trying to cram as much information about the blacklist and the 1960 election and classic Hollywood as possible. I know all too well how easy it is to get caught up in the minutiae of the world a novelist creates, but one of the inspirational writing quotes I have taped above my desk says, “Story isn’t about details, story is about what matters.” (I forget who said it.) I think if Mary had been more judicious about which details to include and which to exclude, Memory might have made for a tighter, brisker read that still made the points she wanted to make.

But there’s enough good stuff here for me to recommend it. A reader who isn’t also a writer is less likely to care whether there’s too much dialogue or whatever, and one who loves Old Hollywood and/or cares about modern American history will find much in this book to appreciate. I just wish it wasn’t so detailed.

Memory comes with a supplemental website which goes into greater detail about the films referenced in the book as well as the real-life events depicted.