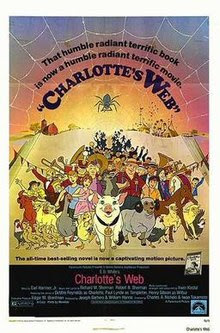 Of course I love this movie. Of course I watched it as a kid every time it aired on TV. Of course I own the book. And yet, as I re-watched it last week for the first time in many years, I found new insight in this story I know forwards and backwards.

This may be the most life-affirming children's story of all time. The specter of death hangs over Wilbur and Charlotte: the former as an external threat, from the circumstance of being born on a farm, the latter as an internal threat, from being born as a creature with a terribly brief lifespan.

Yet again and again there's an emphasis, particularly through the songs, on how life is a gift to be treasured, however short — and that circumstances can change, if one has the will to change them.

How very special are we indeed. 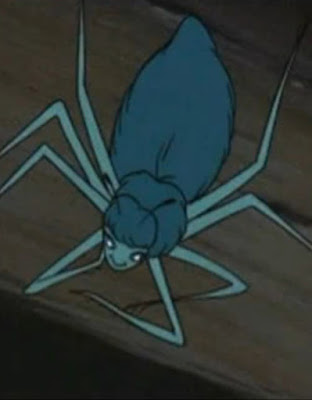 Naturally, it's also nice to now recognize the names of the people who made such a sublime movie. Debbie Reynolds needs no introduction. I recognized Paul Lynde even as a kid because of Hollywood Squares. Knowing Agnes Moorehead did the voice of the goose gives me a whole new level of respect for her. I know Henry Gibson was on Laugh-In, but I never saw any episodes with him in them. And holy crap, Danny Bonaduce was in this too? (He was Fern's brother.) 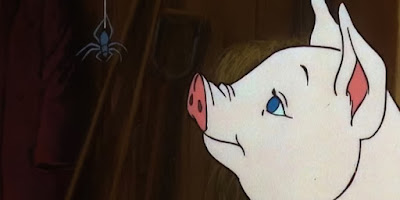 The co-director (with Charles Nichols) is Iwao Takamoto, a man who, if you're of a certain age, helped shape your childhood. At Disney, he designed characters for, among other films, Cinderella, Sleeping Beauty and Lady and the Tramp — and then he moved to Hanna-Barbera and did the same for Scooby-Doo, The Jetsons, and more. He went on to become a producer and director at HB, as well as a VP.

And then there's the music. I have talked about Richard and Robert Sherman before. It's gratifying to know the reason these songs still hold up is because those guys wrote them. 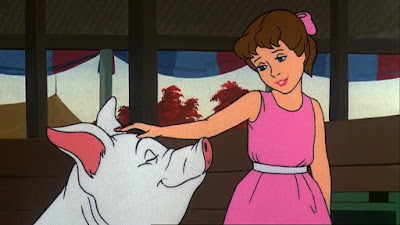 I've come to believe in recent years that Charlotte's Web is more than a little subversive. Charlotte, in a sense, acts as a campaign manager or advertising agency would, selling the perceived virtues of her client to a susceptible market. Why is Wilbur terrific, radiant, humble? Because Charlotte's campaign says so. 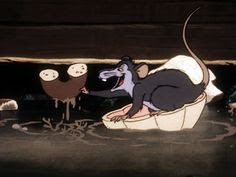 The genius part of it is, Wilbur doesn't necessarily have to do anything for the campaign to work. The market — i.e., Zuckerman and his family and neighbors — reads what they choose into the campaign, whatever makes the most sense to them, and in the end, the needs of the client are served. No one questions that Wilbur is some pig!

This passage from the book says it all:


Finally, one morning toward the middle of July, the idea came. "Why, how perfectly simple!" [Charlotte] said to herself. "The way to save Wilbur's life is to play a trick on Zuckerman. If I can fool a bug," thought Charlotte, "I can surely fool a man. People are not as smart as bugs."
Wilbur walked into his yard just at that moment.
"What are you thinking about, Charlotte?" he asked.
"I was just thinking," said the spider, "that people are very gullible."
"What does 'gullible' mean?"
"Easy to fool," said Charlotte.

There's a slightly religious tone to the initial discovery of the message in the web. In the book, Zuckerman consults a minister, who confirms his suspicion that divine intervention brought Wilbur to their community, though no one ever specifies what this means. (I'm reminded of Jimmy Durante's interpretation of the actions of the squirrel Rupert in A Christmas Wish.) 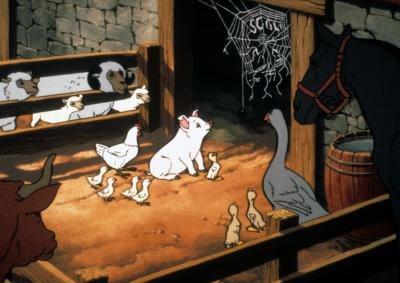 The cynical part of me suspects this worked because these were rural folks instead of urban ones, and in 1952, the year Web was published, the divide between the two was sharper than today. Then again... I dunno. What if Wilbur was a cat living in an apartment?

This leads me to another aspect of Web I find curious, and it involves Fern: she knows the animals talk. In the book, it says, "The animals treated her as an equal," and they openly talk in her presence — but of course, when she tells her parents this, they think she's just being imaginative. 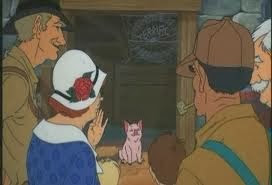 Logically speaking, this has the potential to open up a great big can of worms, but it's taken for granted as just another aspect of the story. That's probably a good idea; one wouldn't want to think too deeply about the implications of sentient life forms raised in servitude to humans... 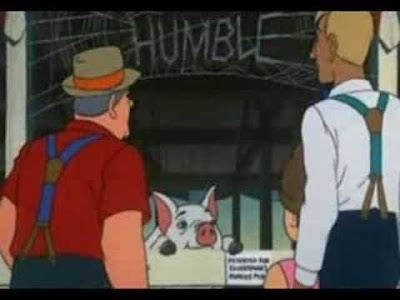 A brief word about the live-action version: at the time it came out, I was opposed to the very idea. Now, I looked at a clip and found it not as terrible as I feared, even if it looks like a Babe movie. Julia Roberts is an acceptable non-singing replacement for Debbie Reynolds. I understand CGI-rendered Charlotte had to look realistic, but damn, was she ugly!

The original Web, though, stands on its own as an animation classic.