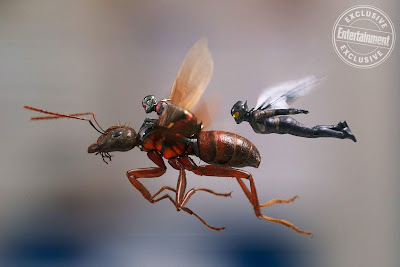 So Virginia and I spent last Sunday, which was gorgeous, on Governors Island, in New York's East River, near Ellis Island. There was a folk music festival going on, and though we didn't see as much of it as we had planned, what we did see was nice.

She talked me into trying a free yoga class, one of a bunch of smaller events taking place on the island that day. I had never done it before, believing I didn't have the body for it (to put it mildly). Even though I've lost a little weight recently, I'm still convinced I don't have the body for it! She was more experienced, but I think it was still a bit of a challenge for her too. If there weren't little kids taking part, I probably would've been more embarrassed than I already was!

That evening, after dinner, we went to a free screening of Blade Runner at a hotel in Manhattan. She had never seen it and was curious. She liked it a lot. I hadn't seen it in years; looking at it again now, I was struck by how little "action" there was in comparison with today's SF flicks. There's a much bigger emphasis on atmosphere and setting - and of course, so much of it is on real sets, not CGI ones. I can imagine how big a contrast it is to the recent sequel.

The novel revision is going well, though I've hit a patch in which I'm doing much more rewriting than I had anticipated. I'm cutting stuff but also adding details the previous draft didn't have — more the cause-and-effect type than anything else. I'm more aware of story mechanics: if I want so-and-so to happen, what all must happen first? And how much of that do I need to show?

My critiquers still like the story, though I had to revise a chapter a second time when it received some hard, not harsh, reviews. You think you've written good stuff and you feel good about it, then you're told it doesn't make sense and you're ready to chuck the whole thing: that's fiction writing. Still, I do feel I'm on the right track.

It would be silly to say I'm taking next week off for the holiday, like I usually do at this time, so I won't say it. I plan to stop by the Movieworld farewell party next week and take pictures, so you'll actually see me again sooner than expected.

In the meantime, your links after the jump:

Pam thinks The Muppet Show had some really creepy moments.

The group formed out of the closing of the Lincoln Plaza Cinemas is putting together a film series on Manhattan's Upper West Side this summer.

Could Alex Kurtzman's new deal with CBS mean a whole lot of Star Trek in the future?

Benedict Cumberbatch not only plays a superhero, he recently got a chance to be one.

Former Retrospace blogger Gilligan has a new blog, Video Zeta One, for cult movies. Here's a piece on a film with two members of the Manson Family in it. (Totally NSFW!)

Here's a huge, but a must-read article on the drawbacks of streaming movies and how it compares to the days of the video store.

And here's an equally fascinating article about living spaces in TV shows and how their unrealistic environments mess with our heads.

How can Incredibles 2 make you a better writer?

Bull Durham turns 30. Also, check out Tim Robbins' message to the people of Durham on the occasion.
Posted by Rich at 7:30 AM