Movieworld, the jewel of Eastern Queens, to close 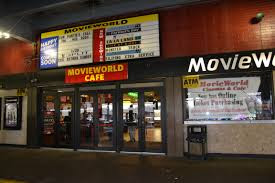 From the Facebook page of Movieworld Douglaston, dated June 11:

...The landlord has exercised a clause in the lease that requires us to vacate within 30 days.  We are not closing for any other reason than we are being required to under the terms of our original lease.  A Lowes store will be taking the entire lower level of the shopping center and construction will start right away.... It has been an amazing experience being able to bring movies to all of you.  We encourage everyone to keep going to the movies!


(Thanks to Andrew for the tip)

Man, I hate writing these posts. It seems like I've written too many of them in the not-quite eight years this blog has been active. Some hurt more than others. This isn't that painful, but only because I'm not as familiar with this theater as with others. Still, I feel this loss, too.

Movieworld might have provided the best bargain for first-run films in Queens, if not all of New York: $11 full price for 2D films, $7 matinee before four PM, and $6 all day Wednesdays.

A proudly independent, community-based cinema located near the border of Queens and Nassau County, in Douglaston, MW had been around for over thirty years. At one point, it was operated by UA until 2004. It shut its doors in April 2008, only to reopen two months later with new owners, and it remained local and independent ever since. MW went digital in 2012, and luxury seats were added a year later.

People complained about the Lincoln Plaza Cinemas being located below street level; well, try running a theater located underneath a mall, inside a parking lot! It was a turn-off for me when I first went there, until I stepped inside and saw it was much like other theaters. In addition to the usual movie food for sale, they have a small cafe with a slightly better class of food and drink. It won't make anyone forget the Alamo Drafthouse, but it's a cozy place to wait for your auditorium to seat. 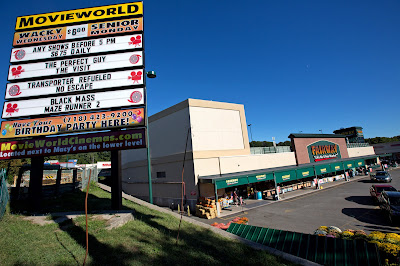 Reading the FB comments gave me a much better sense of what MW meant to the Eastern Queens/Nassau faithful. When MW was threatened with closure in 2017, the fans, like those of the Lincoln Plaza, started a petition to save the theater.

It proved fruitless in February of this year when the local community board voted in favor of bringing in a Lowes on the former site of Macy's, above MW, in order to bring in more business and preserve the mall. The only way Lowes said they could fit, though, was if they also took the space occupied by MW, a claim disputed by the MW defenders. Read more about it here. (Apropos of nothing: I find it very interesting that the debate is compared in this article to a dispute over bike lanes.)

While there are other movie options nearby, such as AMC theaters in Bayside and Fresh Meadows, neither of them are as affordable, nor as diverse (MW also screens Filipino movies from time to time), nor as quirky (you have to admit, its unusual location makes it unlike other cinemas).

I intend to see Incredibles 2 at MW; also, a going-away party is planned for July 2. If I can make it, I'll stop by. MW has said they'll search for a new location, so hope remains alive for now, but like I said, I'm tired of writing these post-mortems, especially for theaters in Queens.

-----------------
Movies I've seen at Movieworld:
Dawn of the Planet of the Apes
Guardians of the Galaxy
Star Wars: The Force Awakens
Finding Dory
Wonder Woman
Pacific Rim: Uprising
Posted by Rich at 5:29 PM