The Best Hitchcock Films Hitchcock Never Made Blogathon is exactly what it says on the tin. It is hosted by Tales of the Easily Distracted and Classic Becky's Brain Food. For a complete listing of participating blogs, click on the links to either website. 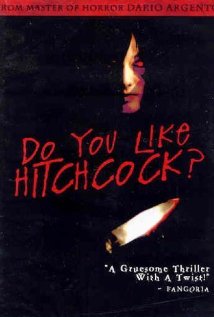 This past spring, I wrote about Alfred Hitchcock and talked about his early career in England, before he crossed over to America and became a superstar filmmaker. According to IMDB, among the many directors over the years who have cited him as an influence on their work include some of the greatest names in film history: Stephen Spielberg, Martin Scorsese, Brian DePalma, William Friedkin, and Quentin Tarantino. A new film is currently in the works in which Anthony Hopkins will play the master of suspense himself. In the more-than-30 years since his death, Hitchcock remains a giant in the film world.


While many have tried, precious few have come close to capturing that which made Hitchcock special in their films. One prominent director who claims a debt to his work is the Italian filmmaker Dario Argento. The last time I wrote about him here, I didn't go too deeply into his career, which has spanned over forty years. Though he has never been a mainstream success in this country, those who know his work revere him and rank him among the great horror directors. 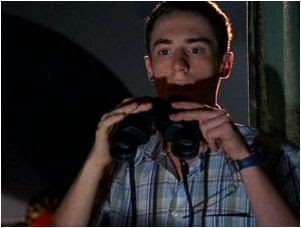 In Italy, the type of work Argento does is referred to as "giallo," which, like Hitchcock, refers to crime and suspense stories, though in English the word also implies horror. The word literally means yellow, a reference to the European equivalent of cheap horror fiction novels, characterized by yellow covers.

Some have called Argento the Italian Hitchcock, so perhaps it was inevitable that one day he would make a movie called Do You Like Hitchcock? It was an Italian TV movie that came out in 2005, and as a result, it's not as gory as some of his more popular theatrical releases. It's about this peeping-tom film student who witnesses a murder and is convinced that it was inspired by the Hitchcock film Strangers on a Train, in which two strangers conspire to commit murders for each other. The peeping-tom aspect, of course, also brings to mind Rear Window. 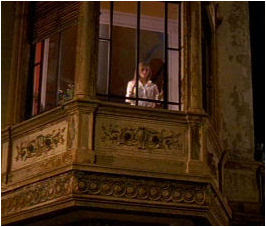 A movie geek trying to solve a murder naturally brings to mind Scream, in particular the video store scene where Randy tries to examine the killings as if it were all happening in a horror movie, which, of course, it is. Though there is also a video store scene in Hitchcock, this movie is not quite as self-aware as Scream.


Hitchcock screened at the Brussels International Festival of Fantastic Film in 2005, and in an interview afterwards, Argento talked about, among other things, capturing the Hitchcock feel, in particular with the music:

I would like to remind you of something. When Brian De Palma was shooting one of his movies, Bernard Hermann died. Brian was desperately looking for someone that could compose like Hermann; he was mainly a violinist, a great one! [Composer Pino] Donaggio substituted for Hermann and wrote the music for De Palma. Since I wanted to make a film with musical influences from Bernard Hermann, Donaggio was the obvious choice because he was his heir. Pino Donaggio is a great musician and my friend and we worked together. But we don't work together that often because like I said before, I am an unfaithful director [Dario laughs] and I with musicians I feel there is a necessity for changes! 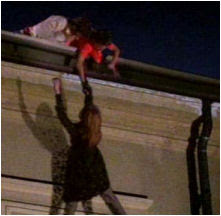 I want to shock the television audience! [Dario laughs] Yes, usually the stories you see on TV are the same, very stupid! Stupid! It is not enough! I want to do something. I come from the movies. I want to show you something!

I know that despite the limited nudity, this movie is more constrained than Argento's usual fare. I thought it was just okay, but then, the only other Argento-directed film I've seen is Suspiria, so I can't say for sure how much different it is. I wouldn't mind seeing more of his films, though.
Posted by Rich at 6:11 PM