The state of performance-capture filmmaking 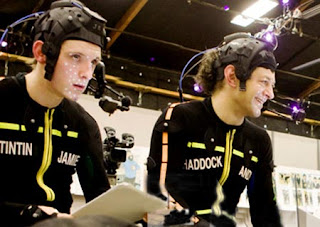 It all comes down to the actors looking each other in the eye and that’s where the truth is told. That’s where all the drama or the comedy happens. You see Jack Lemmon and Tony Curtis in Some Like it Hot, they’re dressed outlandishly and everything else. The truth of those performances, when they’re looking at each other, they’re acting together. Actors just need each other to act together, all that stuff is forgotten. So even though our actors are in motion capture suits, performance capture suits, they’re wearing headgear, a little camera, dots on their face, after laughing at each other for 10 minutes and getting that out of their systems, they’re just performing characters and I think that is the secret to great acting. You have to bring your imagination to the party.

One of the biggest panels at Comic-Con this year was the Tintin one with Steven Spielberg and Peter Jackson in attendance. Among the many things they talked about in relation to the upcoming film was the use of performance-capture technology, the revolutionary process by which regular human actors can be digitally transformed into aliens, animals, monsters, cartoon characters, or any such non-human creature. While it has greatly expanded the boundaries of what's possible within a modern film, it has also been much misunderstood by other filmmakers and actors who don't quite understand how it works.

During Avatar's Oscar campaign, I closely followed director James Cameron's attempts to educate Academy members on P-cap in order to convince them that what they were seeing in his film was not animation - how it was, in fact, something that goes beyond mere animation. While I believed I grokked the basic concept behind it all, it wasn't until I read the preceding quote from Spielberg, at the Tintin panel, that I was finally able to find the proper context. 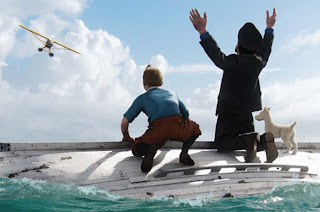 When I studied Meisner-technique acting, we were told repeatedly to forget ourselves and focus entirely on our partner in a scene. How one's partner reacts to the words one is saying will determine one's own reaction, so that level of focus is vital in order to uncover the truth of the scene. Spielberg is saying the same thing here - and while I don't doubt that it must be difficult to look past all the hardware, on that level it seems to me that it must be little different than working a scene with someone in heavy makeup, playing an alien or an older version of their character or someone with a deformity. Either way, latex or hardware, your goal is still the same - to focus on your partner and react to what he's doing. So seeing Spielberg frame it in that context was helpful to my further understanding of P-cap.

Tintin star Andy Serkis, regarded as the Chaplin of P-cap, said something similar in this interview:


[Tintin is] the perfect use of performance capture because it allows you to bring an abstract cartoon character to life without losing the original energy and heart of the source material by Herge... You’re still playing the truth of the character, whether it’s rendered finally as a more animated visual style or photoreal.

Serkis, who will reprise his breakthrough Lord of the Rings role as Gollum in the Hobbit duology, also has a role in the forthcoming Rise of the Planet of the Apes, where he uses P-cap to play Caesar, the genetically-enhanced ape who sparks the ape uprising against humanity. In the same interview, he talks about how the P-cap technology now allows him to perform on the same live-action set or location with the other actors:

There is a positive side to performance capture... It gives you the time to revisit the character and rework stuff. But there’s nothing like the immediacy of playing off another actor and creating the scenes very intimately on the floor with the director. I suppose this interface is the most significant change in performance capture technology. At the end of the day, it’s just a tool to enable actors and the director to work together.

As with Zoe Saldana in Avatar, the O-word has come up as a possibility for Serkis' role in Rise, but I think it's safe to say that the Academy still isn't ready to acknowledge such a part yet.

This Avatar featurette goes into further detail about performance capture, showing how the actors' movements, interactions and facial expressions are indeed preserved in the digital transfer into a computer-generated character.