It Came From Beneath the Sea 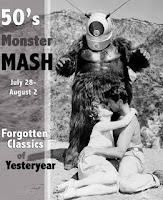 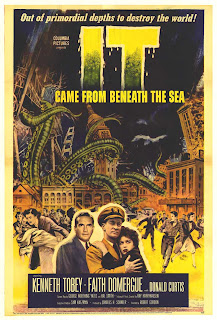 The 50s Monster Mash Blogathon is an event dedicated to classic movie monsters presented by the site Forgotten Classics of Yesteryear. For a complete list of participating blogs, visit the host site. The list of blog posts will go up July 28-August 2, 2011.

It Came From Beneath the Sea
first seen online via YouTube
7.28.11

Monster movies probably had more appeal to me as a kid than at any other time in my life. Part of it was certainly getting to see them on free TV every once in awhile - during holidays, for instance. I think the best thing about watching those old, low-budget flicks as a kid was that they engaged your imagination a little bit more than similar movies today. As disappointed as I was with Super 8, I can at least appreciate the attempt JJ Abrams made to make a modern monster movie in that old-school spirit.

In watching It Came From Beneath the Sea last night, I thought about the differences in how movies like this were made, then and now. For one thing, this movie took its sweet time - not that it was boring, but it didn't feel the need to deliver the goods right away. There were a great deal of interior scenes - the inside of a submarine, scientists in their lab, conferences with military officials, dinner at a restaurant - probably the result of a small budget.

Also, science is taken very seriously. I liked how the scientist characters in Sea are shown as true professionals - regular people, not nerds or oddballs. We see them investigating the mystery of the sea monster, working with the military in combating the creature and taking more than a few risks to life and limb. 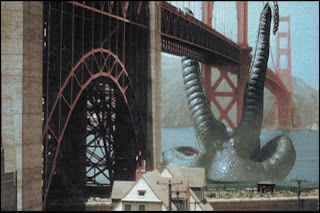 And then there's special effects. Sea was one of the many sci-fi/fantasy movies featuring monsters created by the legendary effects wizard Ray Harryhausen. Inspired, as many filmmakers were, by the original King Kong, as well as sci-fi literature of the 1930s, he designed a wide variety of movie monsters throughout his long career, and brought them to life on the big screen using stop-motion animation. Harryhausen's body of work includes such Saturday afternoon matinee classics as Mighty Joe Young, The Seventh Voyage of Sinbad, Jason and the Argonauts, and the original Clash of the Titans.

The other day I spoke about how performance-capture effects are reshaping the way modern movies look. There's something about stop-motion animation used in live-action films, however, that always creeped me out. No matter how realistic computer-generated effects have become, on some level, I believe, we're always aware of them as being effects. I've found this to be true in Super 8 and movies like it. It's not necessarily a bad thing, especially given the levels CGI have reached, but I think you do have to consciously surrender yourself to the illusion.

With stop-motion puppetry, it's different. Because these are physical objects interacting with actual people, it has a realism that can be unsettling - and to be honest, I'm not just talking about Harryhausen monsters. As a kid, I'd see stop-motion animated shorts on Sesame Street or The Electric Company that would freak me out sometimes, which makes me think that the kind of fear this stirs may be an instinctual one. 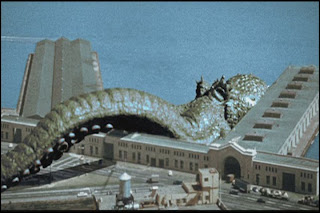 Anyway, no one was better at it than Harryhausen. In Sea, when the sea monster crushes the Golden Gate Bridge, it looks real. It has a physicality you can see that is different (I won't say better) from most computer-generated effects. Although give CGI its due - in the hands of masters like Spielberg or Lucas or Jackson or Cameron, it can be breathtakingly convincing, and as more filmmakers use it, it can only improve over time, and performance-capture will play a great part in that, I believe.

One more note about Harryhausen: I watched a colorized version of Sea. It turns out that Harryhausen helped produce this version, one of several movies he worked on that were recently re-released for DVD in color. I thought the colors looked fine - nothing was especially bright or shiny; if anything, the colors seemed just restrained enough to be believable. Having never seen the original black and white version, I can't make any direct comparisons. 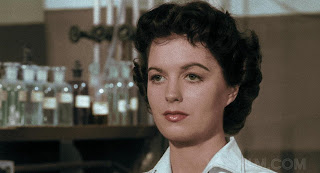 I feel I should also mention that Sea actually bothers to present a decent female character who's way more than just a damsel in distress or eye candy. Don't be fooled by the movie poster: Faith Domergue (who also made This Island Earth, Cult of the Cobra and The Atomic Man in the same year as Sea) is competent, clever and authoritative in this film. It is a shame, however, that the filmmakers felt the need to saddle her with a lame romantic subplot with the naval captain who works with her that adds absolutely nothing to the story. Still, I liked that her character held her own amidst all the men in the story.
Posted by Rich at 10:13 AM