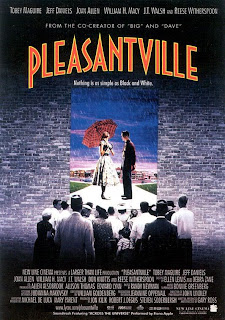 Pleasantville
last seen online via YouTube
7.12.11
This one was a last-minute addition, causing me to re-work my schedule a bit, but I did it out of curiosity. Lately I've been reading Big Thoughts From a Small Mind, another LAMB blog. It's a good one. CS, one of the writers, recently made a throwaway reference to his dislike of the movie Pleasantville in an unrelated post. When asked in the comments why he doesn't like it, this is what he said:

I would probably have to write a separate post on all the things that bothered me about Pleasantville. The condensed version is that the film takes place in the all white sitcom world of the 1950s. Yet it has the nerve try to teach us the importance of equality by showing the divide between the whites and the colours. The thing is, the "colours" are still essentially white folks. Joan Allen even has the option of hiding the fact she becomes coloured via the use of make-up. I just found it insulting that a film featuring an all white cast is teaching us about the evils of racism.

This didn't quite jibe with my memories of the film. I had seen it several times, both theatrically and on video, and I never felt that the movie was strictly an allegory on race. When I saw that it was available on YouTube, I decided to watch it one more time with an eye to answering two questions: Is Pleasantville absolutely about racism, and if so, could it have been made with characters of color? 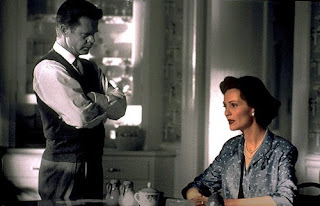 First, though, I think it's important to get writer-director Gary Ross' perspective. In this CNN interview, Ross talks about his father Arthur, a blacklisted screenwriter from Hollywood's Red Scare period of the 40s and 50s, whom he credits as a major influence on the story:


"This false One America, One Way ... I think it's destructive... My '50s were different than other people's '50s... The myth didn't permeate our world, 'Donna Reed' and all that. I longed for that, I wanted to be like other normal families on TV."

There absolutely is a political vibe to Pleasantville, which becomes more obvious once a line in the sand is drawn between the "black-and-whites" and the "colors" (for lack of better terms). Burning books and destroying paintings are without question the acts of a society that suppresses unfamiliar ideologies they're afraid of. Pleasantville is a limited world not only by nature but by design. Its inhabitants are not interested in breaking free of their daily rituals or expanding their knowledge. They're happier that way and they'll fight to keep it that way.


Regarding the question of whether this is a racial allegory, I think it's a mistake to read too much into the way the movie uses the word "colored." Yes, there definitely is a parallel with racial discrimination in the real 1950s America, which becomes more obvious when the Pleasantville "black-and-whites" create laws limiting the freedoms of the "colors." But it's important to also remember that these two states of being are metaphors for two states of mind, conformity and self-determination, and are completely transitory. The "colors" were not born that way; they didn't even exist until David and Jennifer infected their fictional world with knowledge of the real world, and that's a profound difference. 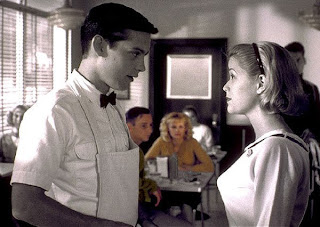 Could David and Jennifer have been played by minority actors? I say no. While they're in Pleasantville they play the parts of "Bud" and "Mary Sue," and those characters in the  Pleasantville TV show are white. If that show is meant to be an archetypal 50s sitcom, then they can't be anything else. A movie about a black kid who identifies strongly with a white TV sitcom family could be quite clever in the right hands (I'm reminded of the scene in Crooklyn where they're all watching The Partridge Family and innocently singing along), but it would be completely different from this one. A non-white David and Jennifer would attract attention from the moment they arrived in Pleasantville and the direction of the story would change significantly. Again, that might make for a interesting movie as well, but it would not be this one.


I have to conclude, therefore, that while one can read parallels to racism during certain points in Pleasantville, these are by-products of the film's overall theme: the dangers of ideological conformity and the need for free-thinking individuals to express themselves, despite the risks.
Posted by Rich at 1:50 PM