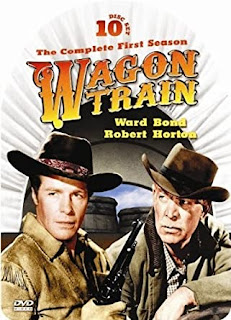 Gene Roddenberry first pitched Star Trek to NBC in April 1964. The ex-policeman turned television writer-producer had made in-roads into the new medium with scripts for anthology series and briefly had a short-lived military series called The Lieutenant, but longed for the ability to address social issues without contending with conservative network censors.

He knew science fiction was a tough sell though, so when he entered the office of producer Herb Solow, he nervously handed him a piece of paper with his treatment on it and likened his proposed series to something more familiar: a western. Specifically, a western that had been going strong since 1957, on two networks, called Wagon Train.

Spun off from a 1950 John Ford movie, Wagon Master, it lasted eight seasons and 284 episodes on first NBC, then ABC. The original stars, Ward Bond (from the original movie) and Robert Horton, were together for the first four seasons. The show centered around a wagon train, obviously, of 19th-century settlers moving to Oregon, led by Bond. Horton served as advance scout for the train. There were also recurring characters who worked with Bond and protected the settlers. The executive producers were Howard Christie and Richard Lewis.

I never gave much thought to the Trek connection (however loose it is), but I watched it wondering how much WT was like Trek, if at all. My conclusion: not that much, but maybe it’s not that obvious based on only three random episodes?


—“The Martha Barham Story” (S3E6). Every episode has a similarly-themed title: “The so-and-so story” this and “the such-and-such story” that. Bond’s character, Seth Adams, wasn’t in this one until the very end. It featured Horton solo, which had me curious as to whether or not I’d actually get to see the titular wagon train at first—then I realized that because Horton’s character is a scout, he’s able to have opportunities for solo stories apart from the rest of the train.

WT had quite the tradition of big-name movie guest stars. This one featured Ann Blyth, and you know what that means: we gotta find out what Jacqueline thought of it, which we will in a bit.

In this ep, Horton’s character, Flint McCullough, reconnects with old flame Blyth, as Martha, when her father’s fort is having Indian trouble: the Sioux and Cheyenne. Good thing Flint is friendly with one of them, a Sioux named Curly Horse; that’s why he’s called in to quell the fighting. Martha, however, is unimpressed; she hates Indians and thinks Flint is weird for having an Indian buddy. When her fiancée gets captured by them and they overrun the fort, though, she must reluctantly rely on Flint for help.

This was okay, though I thought Flint and Martha got out of their jam relatively easily (though Flint does have to walk on hot coals carrying Martha‘s fiancée at one point). Flint and CH’s friendship is presented as a positive thing, and Martha Learns a Lesson from it in the end, but CH has to pay the price for befriending a white man. I suppose it’s a step up from the Lone Ranger and Tonto, but it’s too bad it ended the way it did.

This was one of five guest appearances on WT for Blyth. Jacqueline talked about how Blyth had her fourth child that same year, 1959, and moved to TV instead of a more lucrative career in Europe to be with her family. She also wished the climax had played out differently, but overall:


...We don’t know if Robert Horton will ever learn the fate of his friend, or if Ann, one day telling the adventure to her children and grandchildren on the prairie, will ever comprehend how much Curly Horse gave up to save her. But we see it, and our inability to tell them what happened, and to watch them go off to resume their presumably happy lives, unknowing, is a powerful and ironic indictment of the ignorance and waste of bigotry.

—“The Captain Dan Brady Story” (S5E1) Bond died after season four and was replaced by John McIntire as new wagon master Christopher Hale (and no, they don’t explain what happened to the Adams character). Joseph Cotten guest-stars as a Buffalo Bill-type frontiersman turned entertainer who abandons his stage career to join the wagon train along with his adopted Indian son, but as its chief scout—and because Hale is swimming in debt, he agrees, at Flint’s expense. But things don’t go as swimmingly with Brady on board. Look for a pre-Gilligan’s Island Dawn Wells as one of the wagon train settlers.

This ep was written by future Trek scribe Gene L. Coon, one of a number of teleplays for the show he was involved with in some capacity. He had also written for Maverick, Have Gun Will Travel, Bonanza, Rawhide, The Wild Wild West and The Virginian, among other shows and films.

This was one of two WT episodes Cotten appeared in. I liked it because it deflated some of the myths that the Buffalo Bills of the era were responsible for perpetuating. Captain Dan’s Indian “son” seems like a yes-man at first, his “faithful Indian companion,” until the moment when he steps out of character, so to speak, and reveals himself to be an individual. It’s a powerful and unexpected moment.

—“The Caroline Casteel Story” (S6E2). This was my favorite of the three eps I watched, and not just because a pre-Big Valley Barbara Stanwyck was the guest star. Stany played a woman liberated from years of enslavement within an Indian tribe and passed off as the missing wife of a dude who had spent years mourning for her. They, along with “their” son, join the train and at first the husband is overjoyed, but problems arise when he sees his “wife” exhibiting Indian-like traits.

Stany, who appeared in four WT episodes, is awesome in this, but that should come as no surprise. I was amazed with how the ep was willing to reveal the prejudices of the WT settlers, the people whom you would normally think of as the “good guys,” if not the front-and-center heroes of the show.

Caroline is hailed as a hero herself for surviving her ordeal with the Indians until she shows signs that her time with them was not all negative. The episode walks a fine line here; Caroline doesn’t appear to have Stockholm Syndrome, but she has learned “the enemy” the white settlers think of as an evil, faceless mob are people like them, with their own culture and traditions. It’s a very progressive message which must have resonated in the time of civil rights.

If these eps are indicative of WT as a whole, I’m impressed. I can see how Roddenberry could have found a spiritual connection with the show at the very least, even if it was different thematically. WT’s willingness to re-examine the myths and legends of the Wild West makes it relevant beyond its time.
Posted by Rich at 10:25 AM