Loews JC to get $40M renovation! 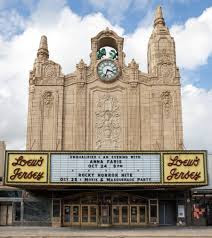 ...Under the new plan, Friends of the Loew’s will be involved in the renovation plans, and oversee community programming, while the commercial operator will be charged with finding national and international acts to perform at the 3,000-seat theater.

UPDATE 6.15: I had thought Friends of the Loews would have made a statement by now, but they haven’t yet, so I’ll chime in with my thoughts. First, all due credit for this victory, in a battle that had gone on at least since 2014, goes to Colin Egan and everyone at FoL for keeping this special place viable and functional for decades. They are the real heroes here.

FoL has said in the past the future of the Loews was as a non-profit venue that caters to the headliners as well as the local acts, so when I see statements regarding “national and international acts,” I got a bit concerned, so I hope they will publicly renew their commitment to this path soon, a plan which is in the city’s best interests as well as the theater’s. To his credit, mayor Steven Fulop specifically mentioned the diverse communities within JC in Thursday‘a press conference, so I remain hopeful for the moment. Also, I believe old movies will continue to have a place at the Loews, at an affordable price, that everyone can enjoy.

Fulop and JC would be wise to continue to emphasize the Loews’ convenient location across the street from the PATH train, only minutes from midtown Manhattan. While not the same thing, I believe lessons can and must be learned from the fustercluck that resulted from transportation from the Super Bowl at the Meadowlands a few years ago, and support mass transit during major events, such as a concert at the Loews.

Plus, I hope the Loews’ renewal will mean downtown JC’s renewal. I’ve walked around the area surrounding the theater; it’s not terrible, but it could be better—and “better” does not necessarily mean homogenized and made to look like everyplace else while stripping it of its cultural identity. There can and should be a balance.

And all of this, of course, is contingent on a solution to our Much Bigger Problem coming as soon as possible. Still, this news gives us a future to which we can look forward.
Posted by Rich at 1:22 PM