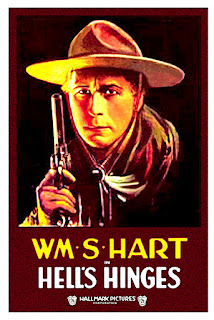 
His eyes contain no warmth, no little twinkle to signal to the audience that he actually has a heart of gold; in fact, his eyes are mean—small and hard. He gives off no sign of emotion or attitude, no hint of what he may do next. He just stands there, like a rock in Monument Valley, and it’s up to us to figure him out. He doesn’t even seem to be an actor. Rather, his presence seems to say, “This is what a western hero looks like”—his behavior, his look, his truth. Whatever action Hart takes will explain what the American West was all about.

While watching him in the film Hell’s Hinges, my initial impression was he reminded me of Gary Cooper: tall, laconic, taciturn. Unlike Cooper, Hart did seem to have a hardness to his on-screen presence, a quiet intensity that burned even in his vulnerable moments.

Before John Wayne, before Randolph Scott and Joel McCrea and Roy Rogers, there were two big-name western stars: Tom Mix and William S. Hart, and they dominated the silent era. Perhaps I’ll talk about Mix another day. Today it’s all about Hart. 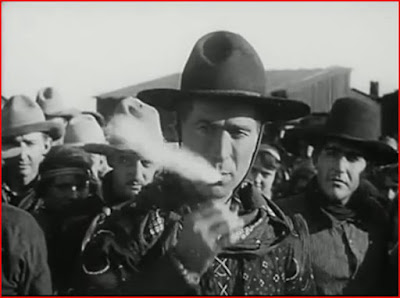 The William S. Hart Museum was created from his LA mansion. In healthier times, you can check out his collection of American art (he was friends with James Montgomery Flagg, among other artists) and Native American paraphernalia, plus the park with a herd of bison, and the dog cemetery (Hart owned eleven dogs).

The New York State native spent many years as a stage actor before transitioning to film at the age of 49. He took the Wild West to heart (no pun intended): he owned Billy the Kid’s guns, he knew Wyatt Earp and Bat Masterson, and he insisted on realism in his westerns. His films were grittier than those of the flashier Mix, who came later in the silent era and and overtook Hart in popularity.

Buster Keaton made a film called The Frozen North, from a treatment by Fatty Arbuckle after his rape trial, that was a parody of Hart films. Apparently Hart made statements presuming Arbuckle’s guilt before the facts were in. Arbuckle wrote the original treatment in response and Keaton bought it. 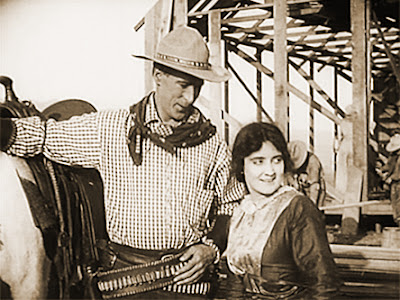 Hart was out of the game by 1925, the year of his independently-produced swan song, Tumbleweeds. The only time he spoke on-screen was in a prologue to a 1939 re-release (and his theatrical roots show in the way he talks!).

Hinges was released in 1916 and Hart co-directed it (uncredited) with Charles Swickard. It’s about a desperado type in a lawless Wild West town who experiences a Paul-on-the-road-to-Damascus conversion after a preacher sets up shop—specifically, after seeing his sister—and must oppose his former friends who want to undermine the preacher’s work with the God-fearing minority. Look for a pre-fame John Gilbert as one of the townspeople!

It’s rare that the acting in a silent film impresses me the way it would if it were a talkie, but I thought the acting here was very good. I believed Hart’s character, especially in the scene where the sister prays while the rowdy townspeople cavort in their church and Hart is moved by what he perceives as her inherent goodness and innocence. It’s a very Griffith-esque moment, and Hart sells it without overselling it, which lesser silents might’ve tried to do (though with the overlaid images of a cross, this comes close). Jack Standing played the preacher and Clara Williams played the sister. 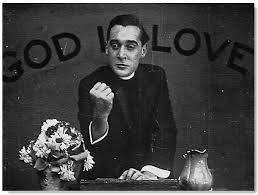 No one comments on the irony of Hart’s character using violent means to get the bad townspeople to play nice with the preacher. To his credit, he doesn’t try to convert anybody; he just wants both sides to live and let live, but events reach a point where Hart has to whip out both of his pistols and (spoilers for a century-old movie) burn the whole damn town to the ground.

Yeah, I was shocked too. Hinges starts out New Testament and ends Old Testament. I was reminded a little of Paul Thomas Anderson‘s There Will Be Blood, which was set in a time very close to the one here. Daniel Day-Lewis’ character undergoes a similar conversion but his was insincere from the get-go, a political maneuver, and while Hinges is not as over-the-top, it has a similar Biblical feel to it, complete with an apocalyptic climax.

Filming that scene looked dangerous for the actors—lots of shots of them running around screaming while the flames got higher and higher. That took me out of the movie for a moment, thinking of how everybody did everything themselves back then. 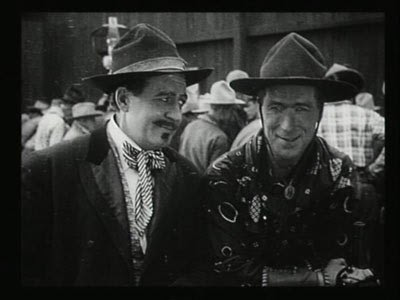 
...With heavy-handed religious symbolism and florid titles, it seems over the top when it is described. However, while the film is being watched, everything melds together into a wonderful cinematic experience. The climax, with Hart emerging from the inferno he has created to witness the destruction of Hell’s Hinges, is often used as an example of the power of the silent western.

Hinges was an atypical western, but I suppose in a time when moralizing filmmakers like Griffith and DeMille dominated the industry, it wasn’t so atypical a dramatic film.
Posted by Rich at 7:00 AM