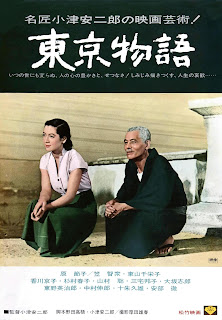 It’s time once again for us to eat our cinematic vegetables! I’ve gotten kinda flabby around the middle gorging on Hollywood films, so I’m gonna change my diet for awhile and indulge in a few foreign movies, the kind that are supposed to be “good for you.”

Don’t get me wrong; I’m only being slightly serious about this. It’s one of the oldest debates on this blog: just because some big-shot critic says a certain movie is great, does that mean you have to like it too? Especially if it comes across as “boring”? (Please note the quotation marks around that word.) I still haven’t found the answer to that question; I doubt I ever will—but I do want to mix things up around here and look at some foreign films.

Japanese filmmaker Yasujiro Ozu is one whom I’ve heard a lot about but whose work I had never seen before. Omigod, do the critics fall all over themselves praising this guy: his films often make the “all-time best of” lists, Criterion has his films in its collection, they discuss him in film school, the works—so he must be worth watching, right? Well, I was very lucky to have found one of his biggest hits online to watch: the film Tokyo Story. I’m pleased to say I thought it was good, though it took quite awhile for me to appreciate. 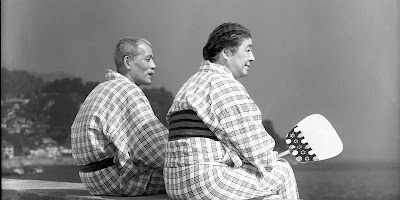 In Tokyo, a pair of grandparents visit their extended family for a few days in Tokyo, which they’ve never really experienced before. That’s the basic plot, and even that takes awhile to get going. The movie’s an ensemble, so we see the grandparents with different combinations of offspring and in-laws and friends, in different locations, day and night. Ozu gives us many great shots of post-war Japan, urban and rural.

One thing I noticed early on was Ozu’s filmic style. He used a lot of 180-degree POV shots within a conversation, in which an actor will look directly into the camera as if the viewer was the other character in the dialogue. It involved the viewer in the story more, which took some getting used to; usually when a filmmaker does this, it’s for an obvious, plot-related reason. 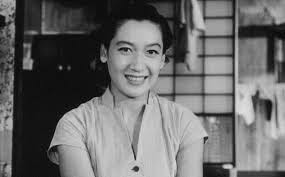 Also, Ozu liked to frame the settings head-on, as if it were the days before DW Griffith freed the camera from its fixed position in front of the action; the difference being that Ozu provided greater depth of field, at a lower angle. We might observe action within a room from the far end of the house, for example, but he would also layer characters at different depths within a single room. He was conscious of composition between actors, or between actors and their settings, and often the results were pleasing aesthetically. He had an excellent eye for this kind of thing.

Tokyo is about the younger generation’s obligations in taking care of the older generation, something the characters take very seriously, though if I’m not mistaken, this is also a strong cultural imperative within Japan. The children and grandchildren want to entertain the grandparents and do things with them, but there’s always an excuse that limits the amount of time they spend with them. They pass the grandparents off on each other like hot potatoes. (Cue Harry Chapin singing “Cat’s in the Cradle.”) Though I’ve never seen it, I was reminded of the old Hollywood film Make Way For Tomorrow, which deals with similar themes.

In terms of dramatic tension, I didn’t feel much of it at first. The grandparents didn’t seem bothered by a lack of attention; if anything, they kept saying how they imposed on their kids. The children knew they should be more involved with them while they were in town, but I didn’t get the sense they felt guilty or ashamed about it.

Later, in a conversation with some former co-workers, Grandpa reveals how his kids didn’t quite fulfill the expectations he and his wife had for them (though I thought their expectations might’ve been too high), but this wasn’t said with rancor or bitterness. It was more like eh, whaddya gonna do, amirite? I suspect there are cultural mores that I’m missing here. The point is what I perceived as insufficient drama made me restless. I longed for Godzilla to show up and stomp all these people flat... 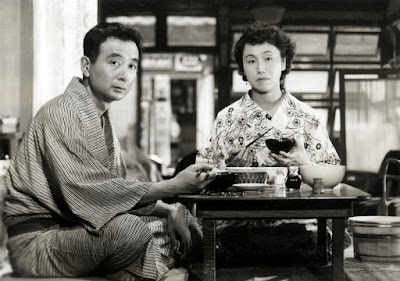 ...but then came the climax. The one character among the children who stood out for me dramatically was the widowed daughter-in-law, Noriko. The actress was named Setsuko Hara, and apparently she was a superstar in Japan for many years. Here’s the THR obituary for when she died in 2015. In the movie, the grandparents were really kind to Noriko in particular, partly out of sympathy for her losing her husband, their son, to war. She’s loyal to his memory to the point where she won’t move on with her life, as much as they encourage her to do so.

She refuses to show how much she’s grieving, though, or how alone she feels. Every time you see her, she’s smiling ear to ear, and at first I wondered whether this was another cultural thing. Most people know how much the Japanese practice politeness; always bowing to each other and all that, and she’s that way with the grandparents: putting up Grandma in her small flat in the city, taking time off work to entertain her, borrowing utensils from her neighbor to help feed Grandma, and still she believes she’s not doing enough.

In the climax (spoiler alert for an almost-seventy-year-old film), Grandma dies, and in a scene with Grandpa, her Pollyanna facade comes crashing down, and it is devastating to see. It wasn’t until that moment that I realized what a great job Hara did throughout the whole movie, maintaining that facade of pleasant politeness. This scene best encapsulates Noriko’s peculiar attitude and I remember how much it stood out at the time I watched it and then even more so, in retrospect, after that final scene with Grandpa.

Noriko is actually a recurring character of Ozu’s. Tokyo was the third film she appeared in, after Late Spring and Early Summer, played by Hara in all three—and now I have an excuse to see those films too. This film, at least, is one the critics got right.
Posted by Rich at 11:30 AM