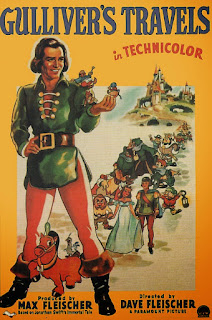 In 1726, before the American Revolution, before the births of Thomas Jefferson, Charles Darwin and Wolfgang Amadeus Mozart, Jonathan Swift published a novel with the humble title Travels Into Several Remote Nations of the World in Four Parts by Lemuel Gulliver, First a Surgeon, and Then a Captain of Several Ships. And if you think that’s long, you should’ve seen what he wanted to call it!

Swift’s piece of speculative fiction was a brutal satire of British society and politics, but somewhere along the way, people only remembered the tiny people and the giants and reinterpreted it as kiddie lit, which I suppose is like reading Animal Farm, remembering only the talking animals, and turning it into a nursery rhyme. Anyway, by 1939, it was deemed safe for the younglings and thus was turned into an animated musical because amusing little kids was totally Swift’s true intent all along.

I had talked about Fleischer Studios here before—the animation studio responsible for Betty Boop, Popeye, and other early 20th-century cartoon characters. They first brought Superman to the big screen shortly after his creation. Their rotoscoping technique of animation would be duplicated at Disney and elsewhere for decades to come. 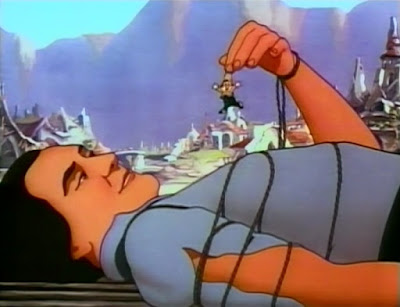 To call it an adaptation of the Swift novel is... generous. It throws in a romantic subplot, adds lots and lots of songs as part of a cute overload, and ignores everything else except the Lilliput segment—which, I suppose, is understandable. You try coming up with rhymes for “Brobdingnag” and “Houyhnhnm!” In fairness, though, the Fleischers were clearly capitalizing on Snow White’s success—and the animation mostly holds up.

Fleischer Studios was in the process of moving to Miami at the time Gulliver went into production, so they quickly hired more animators, but in places, you can tell the production was rushed: crowd scenes in particular are kinda rough. 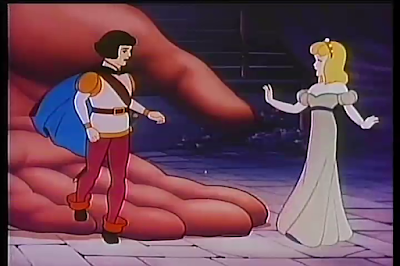 The rotoscoped characters, however—Gulliver and the prince and princess—are exquisite. There’s a nighttime scene where Gulliver is lit by firelight and the shadows on his face are captured beautifully. The prince and princess are clearly meant to evoke Snow White and her prince (who were made with a limited amount of rotoscoping, though in general Disney animators frowned on the technique).

There are other similarities to Snow White. Gabby, the night watchman who first discovers Gulliver and becomes his kind-of sidekick, could be the eighth Dwarf. He even has a squeaky Chipmunk voice, which I thought felt incongruous with his character, but whatever.

The more “comedic” characters, like the two kings, are rendered in a more exaggerated, funny style and the “dramatic” ones—again, Gulliver and the prince and princess—look more realistic. Cute animals are thrown in as a kind of “accent” to the main characters for no particular reason other than they can. And EVERYBODY sings—though in this case, at least singing is integral to the plot. It’s the Disney formula we’ve all grown up with in American animated movies, and credit where credit’s due—it has worked for generations. 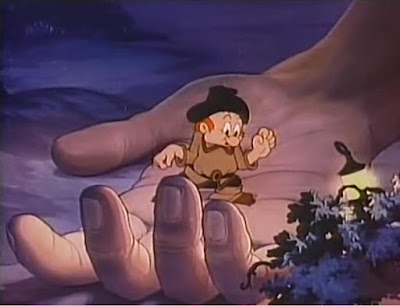 The voice work was fine. Sam Parker as Gulliver reminded me of Bud Collyer as Superman: deep and “heroic” and makes the character sound slightly dimwitted. Pinto Colvig made Gabby sound like a Popeye character: irritable and feisty. Jack Mercer and Tedd Pierce helped sell the contrast between the two kings, which was good; they could’ve easily blended together and been indistinguishable. Jessica Dragonette and Lanny Ross did the singing for the princess and prince. Every time they sung, I felt like I was watching a Marx Brothers movie where they cut away from Groucho and company to show the “romantic leads” sing a song, which always pisses me off because they’re not the ones I want to see!

Five different songwriters are credited on Gulliver and not one of their songs stuck with me the way “Someday My Prince Will Come” or “Heigh-Ho” have, but it’s not easy to capture that kind of magic. They did the best they could.

You can watch Gulliver with the rugrats without wanting to run screaming from the room, I suppose, especially if you’re interested in seeing Golden Age animation from one of the avowed masters of the form.
Posted by Rich at 11:47 AM