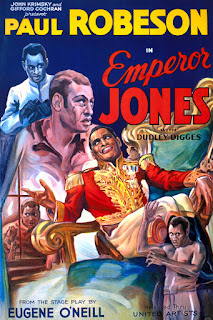 How awesome was Paul Robeson? The son of a former slave, he graduated high school and college as class valedictorian. He played in the NFL while studying law. He was successful on the foreign and domestic stage. He was one of the top recording artists of the 20th century. He was a civil rights activist and supported progressive political causes in other countries. He wasn’t a saint—he cheated on his wife multiple times, for instance—but he was a proud black man who saw and did it all during a time when institutional racism held back many black people in America. Oh, and he made movies too.

Among the many, many awards and tributes he received, both in life and death, include the naming of a Manhattan apartment building after him. Robeson lived in what is now The Paul Robeson Residence in uptown Washington Heights from 1939-41, and was one of the first black tenants. Count Basie and Joe Louis also lived there. It’s both a civic and national landmark—and the street on which it resides, Edgecombe Avenue, is co-named “Paul Robeson Boulevard.”

Of course he has a star on the Hollywood Walk of Fame. A Criterion box set of his films is available. James Earl Jones starred as Robeson in a one-man Broadway play which was turned into a TV movie.  12 Years a Slave director Steve McQueen had plans for a biopic, though that was over five years ago. 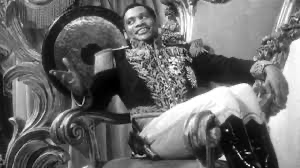 In 1920, the play The Emperor Jones by Eugene O’Neill premiered in New York, starring Charles S. Gilpin as a ordinary black man in his odyssey from train car porter to ruler of a Caribbean island, undone by his own arrogance and lust for power. It was the first big hit in the long career of the celebrated writer known for Long Day’s Journey Into Night, Ah Wilderness!, The Iceman Cometh and other plays.

Gilpin was uncomfortable with the white O’Neill’s use of black vernacular as well as the word nigger. Eventually O’Neill replaced him with Robeson in a 1925 revival. The two had worked together the previous year in O’Neill’s All God’s Chillun Got Wings. Jones with Robeson was a hit—and Hollywood noticed.

United Artists and director Dudley Murphy got O’Neill’s approval of DuBose Heyward’s screenplay despite the substantial changes. Robeson, who was already a singing star as well as a known stage actor, was brought on for the film adaptation. Fredi Washington, another early black film star (best known for her role in the original Imitation of Life), appears as a girlfriend of Robeson’s, and famed vaudeville comedienne Moms Mabley has a small role, as does Rex Ingram. Jones was shot here in Queens at what is now the Kaufman Astoria Studios.

The version I watched had a less than stellar audio track, so when at one point I thought Robeson said nigger, as in the play, I quickly dismissed it, thinking well, there’s no way a film from 1933 would use that word. 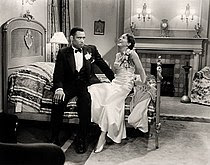 Like Kathryn Stockett decades later with The Help, O’Neill was criticized for using stereotypical black dialect. O’Neill claimed he consulted a black friend when writing the play. I’ve stated here before that writers need the freedom to responsibly embody characters outside their personal experience in their prose. His didn’t bother me, especially given that Jones is clearly not a good guy, one with more than a little amount of self-loathing...

...which brings me to another point. Robeson is everything I imagined he would be as an actor: a physically imposing presence who radiates self-assurance in his role and sings like a mofo. One can only speculate what he would’ve been like in a film opposite Cooper or Bogart or Cagney. 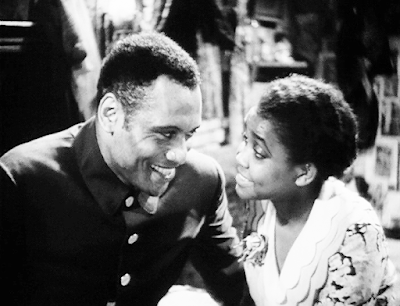 His Jones is morally ambiguous, to say the least: a black man in a white man’s world who plays by his own rules, loyal to no one but himself, and even when he crosses paths with white men who attempt to get him to conform, he turns the situation to his advantage sooner or later. He even says at one point something like, and I’m paraphrasing, he’s the only one big enough to hurt himself—and in the end, he’s right.

At times, I was reminded of Melvin van Peebles in Sweet Sweetback’s Baadasssss Song. Indeed, in another life, Jones could’ve been a blaxploitation film: an empowered black protagonist, rooted in the  urban black experience, taking no shit from The Man, and craving freedom above all else—even if, in this case, he has to leave America to do it. 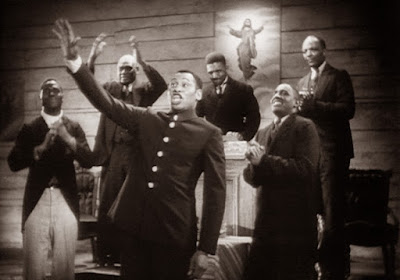 I believe black actors need the freedom to play bad guys as well as good guys, and not just in black movies. We do see it these days—Denzel in Training Day, for a recent example—but I wonder whether or not a backlash such as the one some critics gave (and still give) Jones keeps us from seeing it more often. Say what you will about Robeson as Jones, but the one thing he ain’t is boring! In an era where the most a black actor could’ve hoped for was a supporting role as either a servant, an entertainer, or a background extra, Robeson owns Jones from start to finish. It’s something to see.
Posted by Rich at 1:51 PM