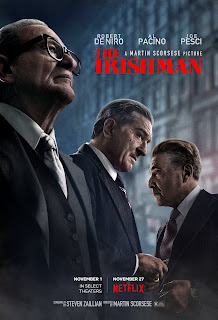 Before I start talking about The Irishman, I wanna make one thing clear: I waited till it came out on Netflix because it’s a three-and-a-half-hour movie and I wanted to be able to take breaks! I also wanted to save a little money, but mostly, I wanted to take breaks. Marty, I love ya, but seriously, bro, why couldn’t you have made this an HBO miniseries?

I bring this up because a lot of people in Hollywood are still freaking out over the fact that Netflix exists, much less that it’s making Oscar-caliber movies with directors like Marty—and I totally understand. I’m lucky to even have Netflix. I think we need, once again, to address the current mishegoss behind it and online streaming in general, because friends and neighbors, it’s changing the way we consume entertainment quicker than you can say “Marvel movies aren’t cinema.”

This Variety piece discusses how the traditional window between theatrical release and TV/home video release is less of an issue overseas than domestically with The Irishman. The limited (at first) domestic theatrical release was motivated, in part, by Netflix’ desire to win Oscars with the movie, and you may recall from earlier this year that some within Hollywood don’t like that streaming movies are Oscar-eligible. That’s the business end. 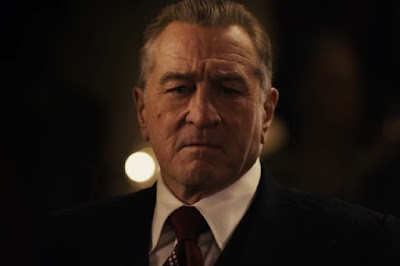 I am now, and always have been, supportive of seeing movies in a theater. You notice more on a big screen than you do on a computer or cellphone screen; under the best circumstances, there are fewer distractions (no, they’re not always the best, I know that); and coming to the movie rather than have it come to you gives it more value... at least in my opinion.

Watching The Irishman on Netflix, however, meant other things: if the movie dragged in any way and I felt myself drifting off, I could stop and come back to it whenever I want. I could more easily stand up and walk in place and move my legs while watching the movie, something I’ve been conscious of ever since I’ve gotten in better shape. This sounds little different than watching it on DVD, except without that aforementioned window that’s such a bone of contention—and I have to admit, I can see why it’s so enticing. And it’s cheaper! 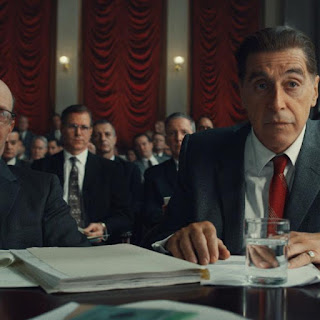 And there are other Netflix films touted as Oscar contenders this year. I’ve already seen Dolemite is My Name; Marriage Story and Uncut Gems, for instance, will also stream on Netflix and they’re all much shorter than The Irishman. In for a penny, in for a pound?

Why not? This is why I have Netflix, isn’t it? And I certainly haven’t abandoned the theatrical experience—just look at what new releases I’ve seen in the past six months and where. Yeah, a part of me feels like I’m contributing to the decline of the movie theater (Netflix’ purchase of the Paris Theater here in New York notwithstanding), but if there are legal alternatives other than giving up on new movies altogether, I’m open to them. 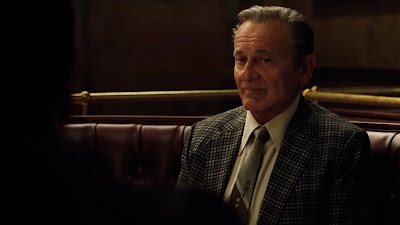 So about the movie itself: you probably know by now that it’s based on a book about mob hitman Frank Sheeran, his service to Philly wiseguy Russell Bufalino, and his association with union bigshot Jimmy Hoffa. It’s Marty telling stories about morally questionable men, as usual.

It took me a long time to really get into this movie. For the first half, I couldn’t grok why I was supposed to care about any of these people. De Niro is De Niro, in a role that required him to cover decades of Sheeran’s life; I think a Best Actor nod is assured. Pacino as Hoffa reined in the excesses that have marked most of his roles ever since he HOO-AHed his way to an Oscar win over 25 years ago. And it was good to see Pesci again, in an elder statesman kind of role. All three were excellent... 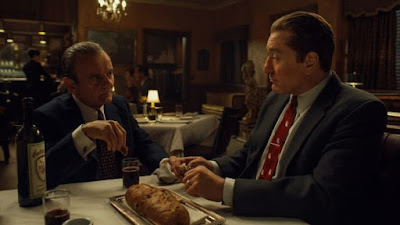 ...but I just couldn’t get into a kind of story I’d seen Marty do before. Seeing De Niro with Pacino is no longer a novelty; Hoffa was more interesting to me than Sheeran, and I couldn’t grasp the stakes for Sheeran as a character—until we got more into his family, specifically his daughter Peggy, played as an adult by Anna Paquin.

Seeing Peggy become more cognizant of the world her father occupies, seeing him compete for her affection with Bufalino and Hoffa, seeing him as a much older man try to make up for not being a good enough father to her—that, to me, was the heart of the movie. Ironic, since I think Paquin has only a couple of short lines in the entire film. The more we see Sheeran struggle in this regard, the more interested I became. The rest, not so much—which is not to say it was a bad movie. It just didn’t wow me the way it has everyone else. This really should’ve been an HBO miniseries. 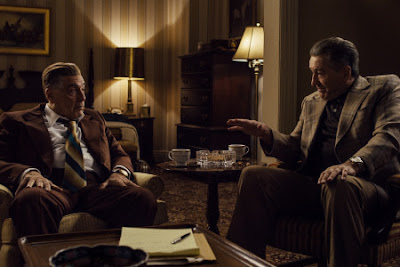 A word about the technology used to de-age the principal actors. This is not the first movie to use CGI to smooth out the wrinkles and put color back into hair—remember old and young Jeff Bridges in Tron: Legacy, for example? The first time I saw De Niro as a younger Sheeran in The Irishman, I held my iPad up close to look for any trace of pixelated artifice and could see none. I thought the scene where Sheeran stomps on the grocer who harassed young Peggy looked a tad unnatural—CGI can’t easily make old De Niro move like a younger man—but maybe I was just expecting some obvious sign somewhere.

Marty’s movies are not easy to get into. His protagonists are never white-hat good guys, the situations he throws them into are never clear-cut, and the choices they make are never with the greater good in mind—but that’s what makes him Martin Scorsese.

That’s what makes him a living legend.
Posted by Rich at 7:00 AM