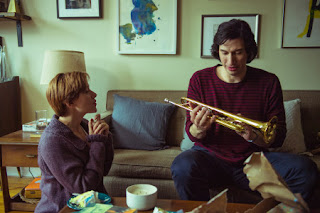 The first time I saw Scarlett Johansson was in the indie teen comedy Ghost World. She was second-billed to star Thora Birch, who was coming off of Best Picture winner American Beauty and was touted to be the star on the rise, but for whatever reasons, it never happened. I didn’t think ScarJo outshined her—I thought they were about equal, talent-wise—but two years later she made Lost in Translation, which put her over the top and made her the It Girl. I’ve liked her since then—she has been more of a kick-ass Black Widow than I would’ve guessed—but I never appreciated how good an actress she really is until seeing her in Marriage Story.

Written and directed by indie lifer Noah Baumbach, it’s about a marriage in decline. ScarJo and Adam Driver, parents as well as spouses, are going through a painful divorce, and though they say they want to keep it amicable and civil, the things that drove them apart escalate till they reach a breaking point.

This film reminded me a lot of 80s-era Woody Allen, but his dramas, good as they are, still have a measure of gentility, of civility, as if Woody wasn’t quite willing to take his characters all the way to the edge, and maybe even over it. Marriage does go to the edge. After speaking through intermediaries for much of the story, whether they’re lawyers or family or friends, the characters end up unloading all the cruel things we think about our loved ones whenever we’re really pissed off at them. It’s ugly, but it’s horribly real.

And omigod, can we talk about Driver? He came from the TV show Girls, and the few film roles of his I had seen didn’t really blow me away until now. (I don’t blame him for Kylo Ren. That’s just a poorly-conceived character.) We see both tenderness and great affection for his young son, and rage and bitterness for the woman he once loved, and he is never anything less than convincing. He really gives it all he’s got in this role. They both do.
Posted by Rich at 10:08 AM