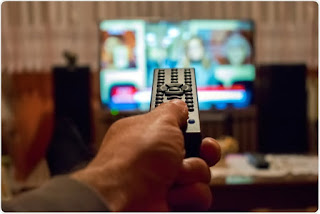 Combining both sides of the coin, as a writer and viewer, I would very much like my shows to get to enjoy the attention span that a week-to-week show gets through the communal experience. Fans can digest and talk about the shows ad nauseam, really taking every detail in and getting to know the characters. While I can appreciate the debate that binge-watching can create deep and meaningful relationships, I think the argument is stronger on the side for spending a longer run with a show. I personally feel like I "grew up with" certain characters back when weekly shows were the norm, while with shows I've binge watched today, once I'm done with them, even if they were great, they are also forgotten about much easier.

And it's so sad to think that people just don't talk about TV in person anymore. I don't work in an a traditional office these days, but my husband does, and what anyone watched last night rarely comes up as a topic of conversation. The problem is that it was something different for everybody. Nobody is on the same page anymore, so the opportunity to talk in depth about a show is gone. Sure you can "find your tribe" online or maybe in real life if you look hard enough, but it's not the same as the true communal experience. I truly hope for that reason alone that the binge release model is a passing fad (or relegated to older shows as opposed to new releases), and that Game of Thrones was NOT the end of "appointment television."

A fascinating distribution model I'd like to see more of is "real-time" releasing. It's been done with teen shows in Europe I'd be curious to see if it would work for the adult market in the US. Episodes are released one scene at a time, at the exact time the scene is meant to be taking place. In the example of the show I watched (SKAM), a scene where the main character meets his friends at his locker before school was dropped online on Monday at 9:15am. Then a lunchtime scene would drop on a Tuesday at noon. Then a party scene would drop on a Friday night. All the scenes were then stitched together and released as a full episode at the end of the week, for those who preferred to watch the show in a more “traditional” way, but the truly immersive experience of watching it scene-by-scene made the viewer feel even more attached to the characters. Earlier this year I spent ten weeks following a full season like this, and it was unlike anything I've ever experienced before. There was no warning when a new clip would come out, so there was utter pandemonium within the "fandom" every time it happened, and the time between scenes was spent breaking down every line and every action in excruciating detail. As a writer, I can see how such a model would present a whole new set of storytelling challenges. I'm not sure if it would work with an adult-oriented show, but if the right story idea presented itself, I'd love to see someone dare to try it.

Anyway, thanks so much for sharing your thoughts. I'd love to know if you intend to continue watching either show beyond the seasons you saw?

I’ll tell you what I told her in response: in a nutshell, I agree that the communal experience of watching a show at the same pace as everyone else counts for something. For instance, Paddy got me hooked on another TV show, a Canadian sitcom called Kim’s Convenience (it’s on Netflix; check it out), and I want to read up on it, but as I learned with Ozark, I gotta wait till I’m all caught up on the show or risk exposing myself to spoilers. I’ve talked to Paddy about it, but in bits and pieces. Not the same thing.

As for that real-time show, SKAM, here’s a New Yorker piece about an American incarnation. It does seem pretty radical, the sort of thing millennials would engage in with a vengeance. I’ve read about how cast members of certain TV shows watch their own shows with the audience when it airs and comment about it with them on social media, but that’s different. This sounds more like a total immersion into the world created by this series that’s delivered piecemeal. It sounds intriguing, but I have a hard time imagining myself getting involved with such a show. Also, as I told Alicia, I was concerned that scenes dropping online without warning, in real time, might prove a distraction from school or work. The New Yorker article doesn’t address that.

And in case it wasn’t obvious, I do still watch Ozark and Longmire, and I’m digging both.
Posted by Rich at 8:30 AM