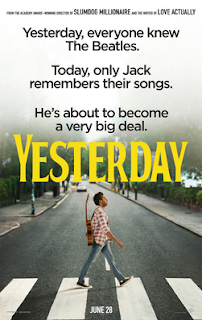 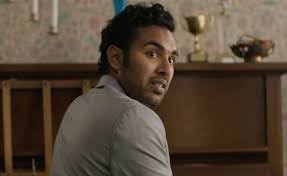 This is the unlikely premise of Danny Boyle’s latest film, Yesterday. A global Y2K-like incident alters  human and digital memory (and even physical objects, like, say, records) such that all evidence of the Beatles is lost, but one guy still remembers, and he uses his knowledge of the band to become a rock star, passing off their music as his own. A similar thing happened to Dr. Crusher in a Star Trek TNG episode.

First, kudos to Boyle for casting a person of color, British TV star Himesh Patel, as the lead in an everyman role that could’ve easily gone to yet another white guy. In addition to being a good singer and musician, he comes across as likable and sympathetic.

Boyle’s approach to this Twilight Zone-like idea didn’t quite work for me, though. Did Patel’s character Jack feel any guilt for his deception? If it were me, my inclination would be to think this situation was only temporary, and that things would return to normal sooner or later, but Jack automatically assumes the memory loss is permanent. Maybe that’s why he assumes authorship of the songs so easily—that, plus the fact that his own career as a singer was going nowhere. But if he was conflicted at all, I rarely got a sense of it—though he does dream that Paul and Ringo call him out on television (no, they don’t actually appear in the film). 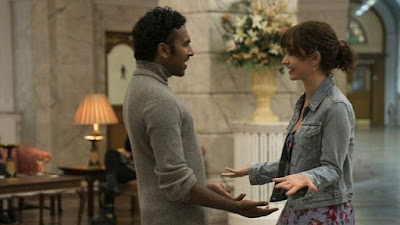 Nor did I feel the romantic subplot with Lily James was all that necessary. It felt like it was there because the filmmakers believed they needed a love story to help sell this story, as if its kooky premise wasn’t enough of a selling point by itself.

I would’ve preferred they explored more of the ramifications of Jack’s situation. Did he really remember all the lyrics to all the Beatles’ songs? What if he forgot some of them? Would he have had to invent new lyrics? (Though he is talked into changing “Hey Jude” into “Hey Dude.”) Does he ever try to find out how this mindwipe happened, or whether it’s possible to undo it? The love story didn’t feel tacked on, but I don’t feel it added that much more, either—which is ironic, since I’ve recently decided to rewrite my baseball novel without its romantic subplot.

So I saw Yesterday with you-know-who and being a musician herself, she had a different take. First, she thought Jack’s inner conflict was apparent, only it was rendered visually instead of through dialogue. Other than that dream sequence, I suppose that’s possible; I dunno.


She also said, speaking to the question of guilt over appropriating the Beatles’ music, that musicians recreate songs every time they do a cover of somebody else’s material and they don’t feel guilt over it—and if this is an alternate timeline where the Beatles never existed, as opposed to having been simply erased (there’s insufficient evidence for either scenario), then it’s the same as if Jack really had composed these songs himself, and again, he shouldn’t feel guilt.

If this movie had been written by a real SF writer, it could’ve explored these things in further depth, but no, having Jack pine over his girlfriend was considered the better (more commercial) option. Also, I should mention that there are some plot twists that further complicate matters, but you should experience them on your own, so I won’t bring them up here.

Yesterday is worth seeing for this new interpretation of the Beatles’ music and history, but I wish it had gone further than it did.