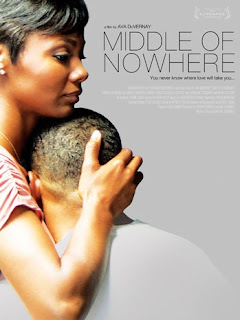 Participant Media and AFFRM (African-American Film Festival Releasing Movement) have jointly acquired U.S. theatrical rights to MIDDLE OF NOWHERE, an elegant and emotional drama chronicling a woman’s separation from her incarcerated husband and her journey to maintain her marriage and her identity. Written and directed by AFFRM founder Ava DuVernay, the film was produced by DuVernay and Howard Barish with producer Paul Garnes.

The rest of the release.

Don't get me wrong; I want to see this movie and I'm glad it got to play at Sundance, but I can't help but be a little bit troubled over the fact that two of the first three films distributed by AFFRM are ones made by its founder. DuVernay has said that her plan was to get two films a year and now the first one for 2012 is another film of hers. I understand that she wants to get her films out there too, but I'd also like to see AFFRM acquire films from other filmmakers, especially if they're as superb as Kinyarwanda.