Once I got into a debate with my friend Pam over who was a better dancer: Fred Astaire or Gene Kelly. I voted Astaire, she voted Kelly, and we kinda went around and around arguing the merits of each. In truth, it's a question that can have no "right" answer. It's like comparing Ted Williams to Joe DiMaggio: you can't go wrong either way.

Of course, being a child of the 80s, I grew up wanting to dance like Michael Jackson. I was in sixth grade when he did the Moonwalk for the first time, and for weeks I tried to do it too. I remember thinking at one point that doing it well depended on what kind of shoes you wore, then thinking that it depended on what kind of floor you did it on. There were times I thought I came close to getting it, but I never did.

The only popular dance I remember doing was the Vogue. Madonna's "Vogue" was big the year of my high school prom, and that was the one dance that even me and my nerdy art-school friends could do - and we did! I never mastered the Macarena, even though 10-year-olds at summer camp did (I was a CIT by then). Can moshing be considered a dance? I never had any problem with that, though don't ask me to try it now. The last time I was in a pit was at a show at some dive bar in the East Village a few years ago and my sides nearly split in two!

Getting back to Fred Astaire, though. I have absolu 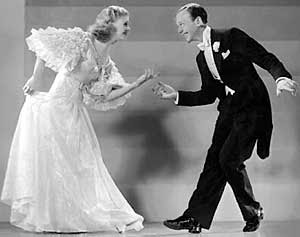 tely nothing against Gene Kelly, and I can watch him all day long too - but for me, I dig Astaire for his class and style, the way he looks in a tuxedo, and especially the chemistry between him and Ginger Rogers. When they perform "Cheek to Cheek" in this movie, notice how the rest of the world falls away after awhile, and eventually it's just the two of them. It's such a sublime moment, such a blissful expression of love and happiness, that it makes you understand why movie musicals were so popular once.

I can't recall the last time I saw a film in a cafe before, much less the backyard of one. This may be the first time. I didn't realize it was a cafe with a wait staff at first; after taking a table in the backyard, I went back inside, not realizing the waitress had already come to my table with a menu. I hadn't planned on having a big sit-down dinner, especially since I had eaten before I came here, so I just ordered a couple of sides: sausages and toast. The Ortine apparently hosts free movie screenings all the time, and I got a free dish of popcorn made with some kind of pepper that really set my mouth on fire!

The backyard is small, and as a result there were maybe 10-12 people there total. Most of them knew each other, so there was more than a little bit of talking, between themselves and to the waitresses when they came and went. Top Hat has a silly, trifling plot (I mean that affectionately) that's easy to follow, so the talking didn't bother me. If this were, say, a Hitchcock film instead, I might feel differently. I hope this won't be a issue if I choose to return to the Ortine, which I suspect I will. It is a very nice place.
Posted by Rich at 12:26 AM